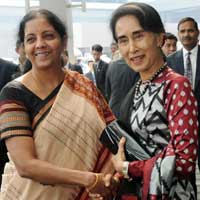 Suu Kyi, who is on a three-day visit to Delhi will also meet External Affairs Minister Sushma Swaraj.

The State Councillor of Myanmar will also accorded ceremonial reception at the Rastrapati Bhawan. She will later visit Raghat to pay tribute to Mahatma Gandhi.

Suu Kyi will also attend a business event during which she will interact with leading Indian business leaders and dicsuss ways to improve commerce and trade between the two neighbours.

Suu Kyi will hold bilateral talks with PM Modi tomorrow. Cooperation on border management and tackling terrorism apart from deepening economic and cultural ties are expected to figure prominently in the talks.

After participating in the BRICS-BIMSTEC Outreach Summit in Goa, Myanmarese leader Daw Aung San Suu Kyi has arrived in delhi for an official 3 day trip to India. She was received at the airport by commerce and industries minister Nirmala Sitharaman.

The State taking place immediately after the BRICS-BIMSTEC Outreach Summit will see the State Counsellor lead the Myanmar delegation and hold talks with PM Narendra Modi on many important issues.

Suu Kyi will also attend a business event during which she will interact with leading Indian business leaders and dicsuss ways to improve commerce and trade between the two neighbours.

During the bilateral meetings, border management and ways to contain militant activities along the Indo-Myanmar border will be an important discussion point. Both sides are also likely to discuss ways to boost trade ties.

Myanmar has also assured that it would not allow any insurgent group to use its territory against India.

Myanmar shares a 1640 km long border with North Eastern states of India and is our window to the east. Many extremists organization active in the north eastern states have often used the Myanmar territory as a safe training and resting ground.

After coming to power in Myanmar this is Aung sang Suu Kyi’s first official visit to India. The national league of democracy came to power in myamar after more than 5 decades of military Junta rule.

Suu Kyi has had a special bond with India. She spent many years of her childhood in India when her mother was a high commissioner in new delhi. She received her higher education from LadY SRI ram college in delhi university.

Suu Kyi, whose National League for Democracy brought down the curtains on five decades of military rule and assumed power in March this year, is the country’s foreign minister.

During her visit, the State Counsellor will call on President Pranab Mukherjee and also meet External Affairs Minister Sushma Swaraj.

The visit of the State Counsellor will provide an opportunity to discuss issues of mutual interest and seek ways to further strengthen the close and friendly ties that exist between the two countries.