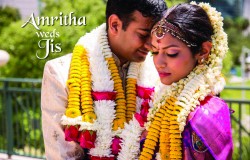 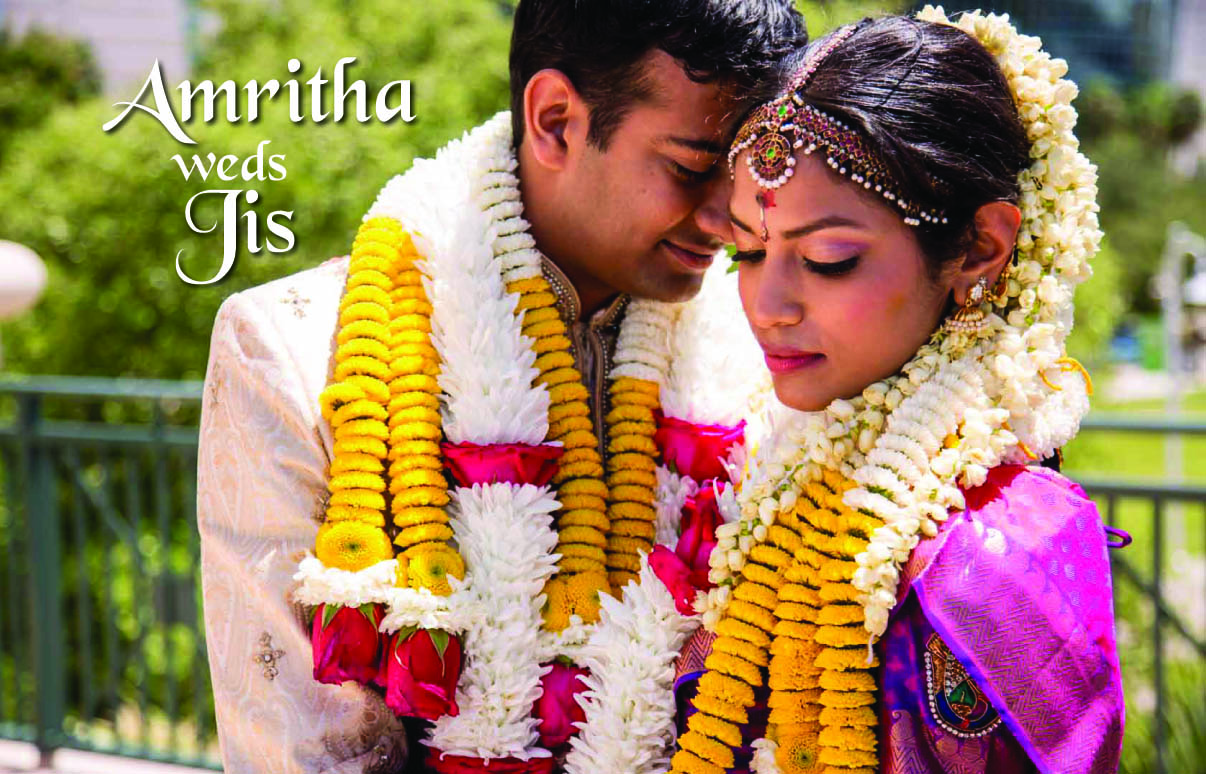 The love story of Amritha and Jis is classic: college sweethearts and dating for five years before marriage crossed their minds. Both studied at the University of Florida, their mutual interest in the arts brought them together. Amritha needed t-shirts designed for her dance team, and Jis was an artist and photographer. Mutual friends introduced them, and the rest is history.

Jis kept his passion for photography alive when it came time to propose to Amritha. On the evening of their fiveyear anniversary, Jis took Amritha to see the Christmas lights at the Atlanta Botanical Gardens. When they came across a beautifully lit pavilion, Jis insisted they take a photo, and after snapping the picture, he showed the camera to Amritha. But instead of seeing the photo they just took, she saw an image of Jis kneeling, holding a ring, with the words “Will you marry me?” Amritha was shocked, but of course, said yes to the love of her life.

The couple began planning exactly one year before the wedding date. They chose to be wed in Tampa, where there would be five events: an engagement, a Catholic wedding, a Sangeet, a Hindu wedding, and a reception. The Tampa. Marriott Waterside Hotel and Marina was large enough to accommodate their 400 guests, allowed outside catering, and was situated right on the water with ample natural light.

For the Sangeet night, planned by Amritha’s family, they chose to keep everything simple, from the décor to the entertainment. They wanted their families to mingle, and not be distracted by too much going on. There was an informal open-mic in addition to the music, and a few dances by Amritha’s mom and her dance  students. The hotel provided basic votive candles and linens, and Amritha and Jis coordinated their outfits to match the pink and blue lighting.

But when the day of the wedding arrived, nothing was held back. The entire day was accented with a bright color scheme of pink, yellow, orange and purple. It began with the Hindu ceremony in the morning, in the hotel’s grand ballroom. There was a beautiful foyer enclosed with full glass windows, allowing a view of the water and boats in the marina. This space was ideal for both the morning ceremony and the evening cocktail hour at sunset. There were graceful South Indian touches throughout the Hindu ceremony, including a welcome table carrying a dancing Ganesh, flowers, rose water, sugar cubes and jasmine garlands for the female guests’ hair. The aisles were also decorated with gold elephants adorned with floral bouquets.

The afternoon church ceremony was more modern, to match the Catholic church venue. Some décor was reused from the Hindu ceremony, such as the gold elephants and bridal party bouquets. Amritha’s bouquet was a bright bunch of cala lilies, to match the men’s’ cala lily boutonnieres and the Mother Mary bouquet.

They also reused their swing from the Hindu ceremony during their reception, but replaced the bright color scheme with deep purple hues, accented with gold and cream-colored linens. VIP guests sat at four long statesmen tables bordering the dance floor, to make their loved ones feel special and at the center of attention. Amritha and Jis’s wedding was all about making a special memory together and sharing it with their family and friends.