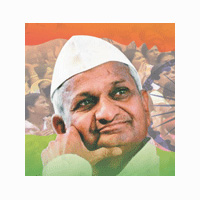 When Anna Hazare began his epic fast a few weeks ago, there were people who called him the Gandhi of today. His vision of the Jan Lokpal Bill became the vision of every Indian as they joined him whole-heartedly. There is a certain similarity between the steps that Gandhi took and where Anna looks to go. However, can he really be compared to Gandhiji?

The first, most striking similarity between the two is the manner in which they were able to get people on their side. It is not a matter of chance or great oratory. To be able to sway public opinion and have the support of millions of people across different regions and cross sections of society demonstrates you have a definite plan for the nation. Both Anna and Gandhi had one .

There is little need to dwell on the simplicity of both individuals, since it is quite apparent. Gandhi lived a very simple life, denying himself any comforts that he could quite easily have afforded. His intent was clearly on being able to attain his goal. Anna too, leads a simple life and follows the ideals of Gandhi. The question that really arises is this – is it possible to become someone just by emulating his or her ideals and lifestyle? The argument can swing both ways, but what you are convinced to believe is that constantly thinking of and being someone can bring shades of their personality into your own. Gandhi and Anna both took on a large enemy. While Gandhi fought the British, Anna faced corruption. Both were spread through the length and breadth of India. While people believe that Anna has actually begun a fight against the government, his movement is actually targeted at bringing about reforms that can curb corruption and promote growth. He has only a small agenda against the government, and those who have succumbed to corruption in particular. His movement only targeted the government in an attempt to bring about reform. The enemy is a much larger one.

Both Anna and Gandhi began their march single-handedly. The might and power of the British was colossal, but that did not daunt Gandhi in the least. His own convictions and focus showed him the way, and as he walked, thousands joined him. Anna did not seek any advice from outsiders before he voiced his discontentment. It was only on his journey that people joined hands with him and matched his footsteps.

It is clear that both Anna and Gandhi paid a heavy price for what they wanted to achieve. Anna began fasts, defying progressing age, and taking on the risk of even losing his life. Gandhi bravely carried out his Dandi March, Satyagraha and protests without any fear of arrest, death or abuse. Anna and Gandhi have both graced the halls of Indian jails for their cause and emerged proudly. Anna told his audience that they should stand rooted to their beliefs. If they must face arrest, they should consider going to jail an armament, a medal of honor. Anna and Gandhi were rebuked and treated horribly – Gandhi by the British and Anna by the government. Both bore it all stoically with a smile, and continued unaffected.It must be remembered that Gandhi and Anna existed in different times and contexts, which are both bound to have an impact on their personalities and moves. Gandhi was left to his own devices, and to a modest network of newspapers to inform, guide and influence people. To be able to talk to people and garner support, Gandhi toured the country extensively. Anna has plenty more at his disposal. The papers and news channels discuss Anna constantly covering every minute of his fast, struggle, and pain. The Internet has helped Anna amass millions of fans, followers and enthusiasts. Anna has managed to make his plea heard overseas, with thousands of conscientious Indians rising to the occasion all over the world.

While Gandhi clearly stood for non-violence and Anna has been his faithful subject, Anna adopts a more radical stance. Gandhi followed the policy where he would offer the other cheek when slapped, smile and forgive. He was more for peaceful talks and negotiations. All he wanted was that the British leave the country. Anna, on the other hand, talks of hanging the corrupt. He is very clear that corruption must end at all levels, and seems to suggest that one can go to any lengths to achieve it.

Gandhi benefitted from an impressive education, and even had the chance of studying abroad. He was groomed to be a leader. Anna, however, assumed the role of one. Anna began selling flowers on the street and does not even come close to the orientation that Gandhi was allowed. It is no wonder then, that, although he has the right intent and goal, his means are not as perfect as they should be. There may be some imperfections in the Jan Lokpal Bill, and several critics rightly discuss these issues. But do they even have anything close to it that can help bring about a reform? When they all have such astute remarks and observations to make of the Anna movement and are completely aware of the state of country and corruption engulfing it, why do they not have any smarter suggestions to make?

Gandhi also had his fair share of critics during his lifetime. Most people did not agree with his philosophies, and the ways that he adopted. He still continued relentlessly. Anna has found a base that have stood with him every moment of his fast, and yet another which makes fun of his ways, ideals and vision. However, there has been no one like Anna or Gandhi about whom the nation can proudly boast. No other individual has set aside personal achievements and pursuits for a bigger gain as these two gentlemen. At the twilight of his life, Anna has nothing to gain from the end of corruption. All he can hope for is that generations after him can live in an India which is improved. He continues to pay a price for his dream, but that does not stop him.