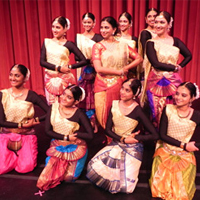 The ageless Classic Western fairy tale comes to life through innovative original choreography, colorful costumes and unique music! Through this brilliant stage performance we were able to bring people of different personalities and creative minds together to bridge a gap between Indian and American culture. Ranjana Warier, winner of the 2012 Knights Arts Challenge in Miami, has brought together six professional teachers in a collaborative effort to show a modern fairytale in a different light. Anvita, a program that showcased for two nights, depicts the story of Sleeping Beauty in a way that one would have never imagined.

Throughout the entire program we see the battle between good and evil, where good ultimately prevails, but what good is the modern version of the story without a sharp twist? The on-stage story depicts the life of Sleeping Beauty in the Indian classical dance form. Just when the audience believes that good has finally triumphed, evil returns with a full intent of destruction. But the Princess overcomes the powers of the evil old witch with the help and support of her beloved people. This story has shown romance and drama through an ancient Indian classical dance form. Through unique Indian classical music with a modern take, the performance left the audience wanting to hear more. By creating a program that had the audience connected, Warier demonstrates that Indian classical dance doesn’t need to fit the stereotype of being boring.

Bringing a total of sixty participants onto the stage, the performance turned out to be a remarkable event and a night to remember for the performers as well as the audience. With over 800 attendees between the two days, reporting that the event was a success would be an understatement. After eight months of planning and three months of practice, Anvita was a superb theatrical production. Being a part of this event has been an absolute blessing and an enlightening experience. An experiment that has become the talk of the town has led many people wanting more and waiting for the unveiling of the next fairy tales in the years to come.

A 2012 Knight Arts Challenge winner, Warier’s efforts to educate children on culture and history using dance as a medium has received wide recognition. She is a multiple grants recipient from local government organizations and has done several lecture/demonstrations promoting Indian art forms. Support from various foundations has afforded a wide variety of Indian dance productions including “Dances of India,” “Symbolisms in Indian Festivals,” “PanchaNidhi,” “Once Upon a Time,” and “Anvita – an adaptation of sleeping beauty in Indian classical dances.” She collaborated with several other dance studios on these productions and has been an active performer/choreographer at several charity events. She was recently invited to work with Town of Davie to offer an educational program for children using performing arts as a medium.

Ranjana has an Engineering degree and a Master’s degree in Computer Science from Florida International University, Miami. She was a nationally seeded chess player and has won several prestigious tournaments in India. She is currently working as a Cyber Security consultant. She is the artistic director of “Rhythms School of Dance” (www.erhythms.net) in South Florida, which offers certified degree courses in Indian Classical dances.

Dr. Neha Shah
Dr. Neha Shah is the Director of Nrutyanjali School of Dance in South Florida and an exponent of Indian classical dance Bharat Natyam. She is recipient of many coveted awards including “Singamani’ from Sur Singar Smasad, Kedar Mani from Kedar Art and Research center, Baroda, and Outstanding Young Artist Award from Junior chambers, Gujarat for classical and folk dances during her over 30 years of career as a teacher, performer and choreographer in India and USA. She has traveled extensively in India and 22 countries worldwide and had the honor of performing in front of Queen Elizabeth, the late Prime Minister of India Smt. Indira Gandhi, and the Prime Minister of Kenya as a representive of India in prestigious cultural and youth festivals.

She is highly acclaimed for her contributions in many creative classical and Folk dance productions and has also served as a judge for many dance competitions in India and USA. To date, 28 students have performed their “Arangetral” under her able guidance. More recently, her contribution as a choreographer and a performer in Rejuvenation (2008), Darkness to Light (2009), Chitram (2011), Panchnidhi (2011), and Anvita (2013) have received rave reviews. Her junior folk dance group also won first and third position in Tampa festival in 2009 and 2012, respectively.

Aparna Matange
Aparna Matange is one of the senior most disciples of renowned and distinguished Guru Dr. Smt. Sucheta Chapekar. After performing her Arangetram in 1987 under the eminent guidance of her Guru, Aparna continued her advance training in Bharatanatyam by learning by learning some rare and valuable compositions of Thanjavur Maratha rulers. With a performing career of over two decades, Aparna has performed extensively in India at various performing arts institutes, in the United States and abroad. A recipient of a scholarship in dance awarded by the Government of India, a title of ‘Singaar Mani, Aparna has various solo and group productions to her credit. She is the founder of Nritya Surabhi School of Dance and imparts training in Bharata Natyam in Pembroke Pines, Florida. To learn more about the Nritya Surabhi School of Dance, visit www.nrityasurabhi.com, call (954) 436-1509, or e-mail nrityasurabhi@gmail.com.

Priya Nagaraj
Mrs. Priya Nagaraj, has been practicing the art of Bharatanatyam for the past three decades. She received her formal training from “Acharya Choodamani” Mrs. Anitha Guha, director of “Bharatanjali”, Chennai, India.
She later continued her training from Late. Mrs. Jayalakshmi Narayanan, a very well known guru in Hyderabad, India in Pandanallur Baani or style.

Priya Nagaraj has the distinction of performing in countries like Singapore, Malaysia and Bangkok at a very young age of 13. She also had the privilege of performing for Youth wing of South Asian Association for Regional Cooperation (SAARC), an international body, representing her University.

She has the distinction of introducing Bharatanatyam as a credit course at Florida Atlantic University, Boca Raton.

Not only has she been performing for diverse audience, she has also been involved in collaborative works like “Rejuvenation,” “Jagruthi,” “Chithram,” and recently “Anvita.” Nagaraj also choreographs dances for numerous cultural events in South Florida like International Women’s day, Palm Beach IndiaFest, AIA and ShivaVishnu Temple of South Florida. She has presented this divine art in the form of Lecture-Demonstrations at various organizations such as Broward County Public Schools and Library and Barnes and Noble in South Florida creating a cultural awareness.

Apart from being well trained in Bharatanatyam, she is also trained in South Indian classical music and is currently training young kids.

Priya Nagaraj has a Master’s in Social Work from Hyderbad, India. Since 2001 she is married and settled with her family in Florida. She runs Narthana Dance Academy in Coconut Creek and Boynton Beach, Florida.

Harija Sivakaumar
Harija Sivakaumar is a graduate of renowned Kalakshetra School of Fine arts in Chennai and one of the few to graduate with the distinction Diploma. She has had the good fortune to be under the expert tutelage of stalwarts in Bharathanatyam such as Rukmini Devi Arundale, Sharatha Hoffman, Adayar K Laxman and Uma Sundaram. Her performances have been broadcast by BBC London and WLRN Miami. Harija founded the Vanee School of Dance in 1986, and has over the years, continued to impart her knowledge in this classical dance form to a number of students. She has conducted over 30 Arangetrams and her forte is choreography, specially ballets. Her productions include Seetha Swayamvaram and Kutrala Kuravanji. With her encouragement her students regularly perform in community and charity events. She has performed with her students for UNICEF: a tribute to Audrey Hepburn and for Miami Children Hospital. Harija now resides in Kendall and runs her Dance school in four locations: Miami, Davie, Coral Springs, and Palm Beach.

COMMENTS
Anvita was a superb choreographed and executed classical event. Everybody was in awe! – Ranjan Patel

It was a magical evening. I had not had the opportunity to see classical Indian dance before and I’m sorry I’ve missed it up until now. I enjoyed every moment of the music, the movement and the beautiful dancers. Again, it was magic. – Lory Reyes

Anvita was a creative way to bring Indian culture to the Davie community and celebrate the beauty of music and dance. Ranjana Warier is educating the public on our ancient traditions, and for that, we’re very thankful. – Faren Rajkumar