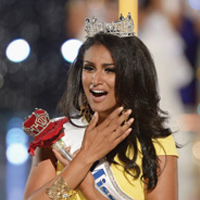 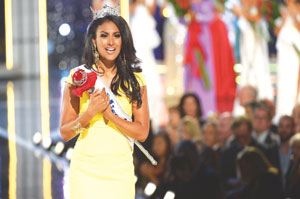 An evening of beauty, glamour and grandeur drew to a close as Nina Davuluri walked away with the Miss America title in Atlantic City, New Jersey. Her crowing moment was met with an equal measure of delight and surprise, given she is the first Indian American to achieve this feat.

Davuluri, 24, is much more than just the lovely face and body required of a reigning beauty. She also boasts a great intellect, poise and equanimity to handle challenges, such as the delicate question hurled at her during the final round. An articulate answer, one that was not just relevant, but also appropriate helped the young lady sail through and wins the competition. Davuluri is now yet another role model for your Indian Americans.

From the outset, Nina pitched herself as “Ms. Diversity,” showing she was not only comfortable with her origins, but also proud of her background. She played intelligently and had the physical looks to back the brains. Pegged as a favorite from the beginning of the competition, Nina kept everyone’s hopes alive right through the final moment. 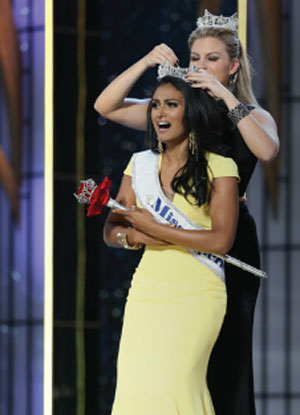 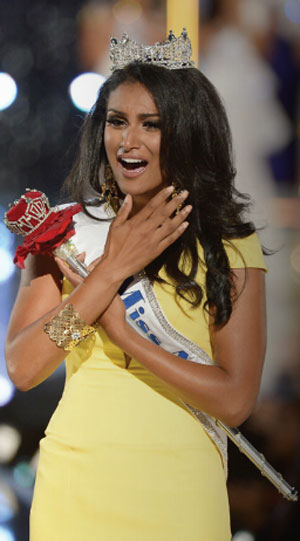 Nina draws inspiration from Vanessa Williams, who 20 years ago created similar history by being the first black woman to be crowned Ms. Universe. Not only did she meet her idol thereafter, but also drew tremendous support from her.

Call it prejudice, or even spite, but there have been a slew of negative comments plaguing Davuluri since her victory. She anticipated much of what came her way, and continues to deal with them with aplomb. What is most surprising is the resentment some maintain as well as their narrow-minded attitudes. Some believe her to be Arabic and a Muslim. She is neither. Some believe she is not a true representative of the title “Ms. America,” and instead think Davuluri should have competed for the Ms. India title.

What is tragic is that the prejudice is not confined to the United States. Had Davuluri been among the contestants of a Ms. India pageant, chances are she would not have stood a chance to even make it to the finals. If you take a look 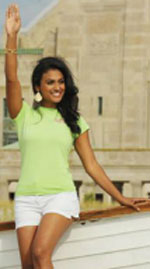 at the winners over the last few years, Davuluri does not conform to the standards that any of them set. According to some standards, her skin is much too dark, and her beauty is not as shallow. Does it matter that none of the millions of photographers present there really needed a flash given Nina’s electric smile? Or that her native beauty and lustrous hair could make anyone envious? Unfortunately, while many Indians continue to voice their 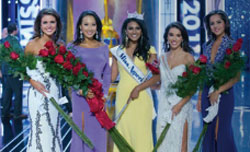 solidarity for Nina, some are no different from those that pull her down.

It is not just newfound fame and brilliance of the title for which Davuluriis grateful. The next year will keep her on a busy schedule, but she does hope to put her $50,000 scholarship to good use. Unlike some pageant winners, Davuluri is not after a Bollywood future, nor is she in it for the glitz and glamour. She intends to continue her pursuit of medicine, while studying to become a doctor. Congratulations Ms. America and we wish you well on future endeavors.