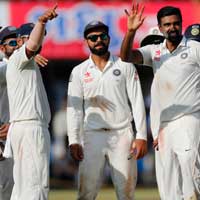 Ashwin at the top of ICC Player Rankings

Off-spinner Ravichandran Ashwin has surged to the top of the ICC Player Rankings for Test Bowlers with a career-best haul of 13-140 in the final Test that helped defeat New Zealand by a massive 321 runs, India’s second biggest victory in terms of runs.

Ashwin, who was named man of the series after he finished with 27 wickets in a 3-0 sweep by India, now has 220 wickets, the most by any bowler after 39 Tests. Ranked third before the final Test in Indore, Ashwin has leapfrogged pace bowlers James Anderson and Dale Steyn to attain a career-best rating of 900 points.

Ashwin, who finished the 2015 year-end rankings as the number-one bowler and was also at the top briefly in July this year, has joined a select band to have touched a rating of 900 points since 2000, the others being Muttiah Muralidaran, Glenn McGrath, Vernon Philander, Dale Steyn and Shaun Polloc.

Chasing an improbable 475-run target, Ashwin ripped through the brittle New Zealand batting line-up with a sensational spell of 7 for 59 to skittle the opposition for a paltry 153 in 44.5 overs with an entire day to spare at the Holkar Stadium, which hosted its first ever Test.

The 30-year-old finished with a match haul of 13 for 140 and ended the series with a bagful of 27 wickets to emerge as the standout performer in a thoroughly one sided series which helped India to regain number one position in Tests.

Earlier, resuming at 18 for no loss, the hosts rode on Cheteshwar Pujara’s unbeaten 101, his eighth Test ton, and an aggressive 50 by comeback man Gautam Gambhir before declaring their second innings at 216 for three an hour before the tea break.

There was hardly any resistance from the Kiwi batsmen as Ashwin scalped one wicket after another to demolish the opposition in just about three hours of play, much to the delight of a near capacity Dussehra crowd.

The pitch in this match did not turn as much as it did in the earlier two games but still New Zealand batsmen looked clueless against the Indian spinners.

Indian coach Anil Kumble and his entire staff erupted in joy in the dressing room as Ashwin fittingly took the last wicket with a return catch of Trent Boult, triggering wild celebrations on the field as well. It was also Kumble’s first series win at home after the success in the West Indies.

The focus will now shift to the five match ODI series beginning at Dharamsala from October 16 with Mahendra Singh Dhoni taking over the reins of the team from Kohli.