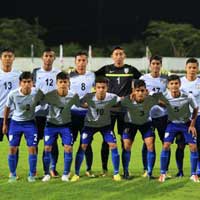 India have lost three games but have shown the heart to fight in the BRICS U-17 Cup in Goa.

Team India and hosts have done everything right in the five-nation BRICS U-17 cup except score goals. Three games and all three the same margin of defeat by a solitary strike. India lost to Russia by a goal even after the visitors played with 10 men for 35 minutes.

India conceded an early goal to South Africa who had landed just hours before the game in india. The last outing against China saw India lose the match in added injury time. So the problem of not scoring is compounded by conceding goals in all game. India know that it could be tough against Brazil in the final game of the tournament for the hosts.

The Samba boys on the other side , have enjoyed 2 wins in 2 outings in the tournament. Brazil beat China 2 nil in the opener and then scored an identical win over Russia in the second game. 2 games and 6 points , Brazil have one foot in the final. They have been clinical and perfect in executing the plan on the pitch.

Will Brazil push India or with nothing to lose will the hosts bring their A game to the field. Either ways, fans will expect India to come out with an another super show with goals galore. Brazil are the favourites to win the match but India is not ready to go down without a fight in the game for pride.

Can Indian strikers find the target against the samba boys or will the 2014 world cup hosts be avail to maintain the 2 nil winning cycle in the tournament?

Post Views: 906
Ashwin at the top of ICC Player Rankings
On World Sight Day, resolve to protect your eyes