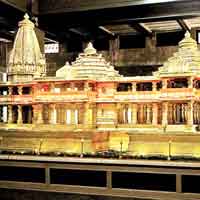 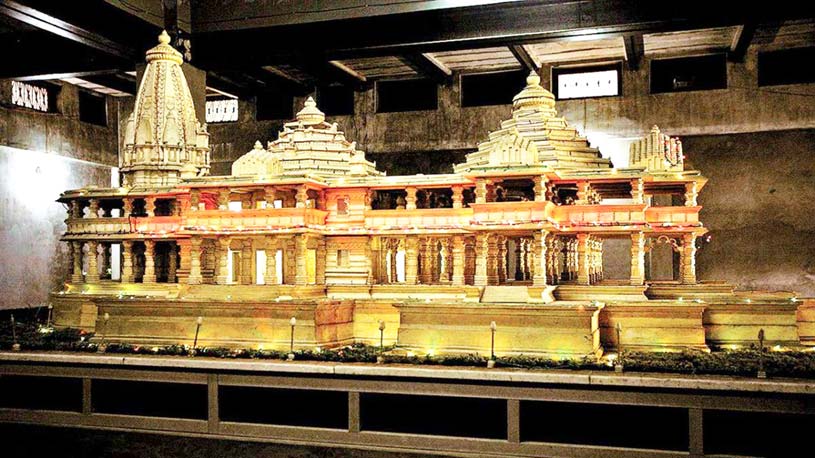 The Ramayan tells us that Sri Ram was banished from Ayodhya and sent into exile for 14 years to deny him the crown that was rightfully his. The great epic recounts the story of those 14 years of trials and tribulations in wilderness. At the end of his exile, which climaxed with Ravan Vadh, or the slaying of Ravan, Sri Ram returned to Ayodhya and ascended the throne that had been deceitfully denied to him. All this happened in the Treta Yuga. 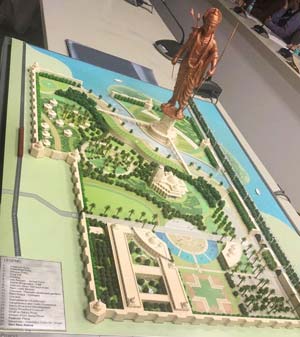 Cut to modern times and the tangled history of Ayodhya, or more specifically Ram Janmabhoomi, the place where Sri Ram was born. It has taken close to 500 years for that land, no more than three acres, claimed by Hindus and disputed by Muslims, to be restored to its rightful owner: Sri Ram.

Between the construction of what came to be known as Babri Masjid by Mir Baqi, a general in Babur’s army, in 1528, and the restoration of the land to Sri Ram on November 9, 2019, by a five-judge bench of the Supreme Court headed by the Chief Justice of India, Ayodhya has witnessed the ebb and flow of both religious and political activism, impacting both society and politics at the national level.

Jawaharlal Nehru opposed the reconstruction of the Somnath Temple — sacked, looted, disfigured and replaced with a mosque — arguing that it would lead to “Hindu revivalism.” Sardar Patel had ignored him and, backed by President Rajendra Prasad, had gone ahead with the reconstruction project. When an attempt was made to force the Government’s hand on Ayodhya, Nehru had his way as Patel was no longer around.

Ironically, Nehru’s grandson Rajiv Gandhi was Prime Minister when the locks that had been placed on the disputed site following a court order to maintain status quo after an idol of Ram Lalla (or baby Ram) appeared under the main dome of the mosque, were opened and worship by Hindus was allowed. Apocryphal stories of the time suggested that the Faizabad district court acted on New Delhi’s direction.

That was in 1986 and the politics of the time determined the Government’s response that was primarily aimed at mitigating the Hindu backlash to parliamentary subversion of the Shah Bano judgement. Arun Nehru, a close friend of Rajiv Gandhi and Minister for Internal Security in his government, is believed to have advised Rajiv Gandhi to play the ‘Ayodhya Card’ as a balancing act. Rajiv Gandhi was to later launch the Congress’s 1989 election campaign from Ayodhya, though that did not fetch the expected result. 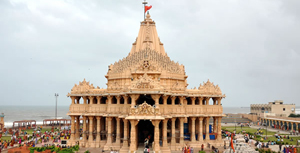 The unlocking of the disputed site also unlocked pent up fury and the VHP took up the issue of Ram Janmabhoomi. As the revived battle for Ram intensified, L.K. Advani moved a presidential resolution at the BJP’s national executive meeting at Palampur in 1989, adopting the Ayodhya Movement as the party’s political project. Advani’s Somnath to Ayodhya Rathyatra, conceived as a counter to V.P. Singh’s divisive Mandal politics, and the fallout over his arrest in Bihar, in a sense marked the shift from Hindu revivalism to Hindu resurgence.

P.V. Narasimha Rao thought he could manipulate the course of history through inaction, deceit, subterfuge and creative application of law. The end result was the demolition of the disputed structure on December 6, 1992. Since then, Ram Lalla has lived in a tent made of plastic sheets at the site whose ownership has now been decided in his favour. 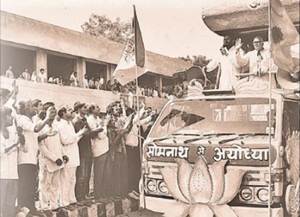 All this while the judiciary prevaricated refusing to rule on the simple fact: Who owns the land? In 2010 the Allahabad High Court gave a ruling, apportioning the land among three claimants, two Hindus and one Muslim. Unsurprisingly it was promptly rejected by both Hindus and Muslims and appeals were filed in the Supreme Court.

A decade after that flawed judgement, the Supreme Court ruled that the land belongs to Sri Ram, the Government will set up a trust which will oversee the use of the land, and Muslims, represented by the Sunni Waqf Board, will be given land to build a mosque. With this, the chapter of Ayodhya’s history initiated by Mir Baqi building a mosque above a non-Islamic structure, as determined by the Archaeological Survey of India, comes to an end.

But that is only part of the story. There are other attached aspects that merit comment. 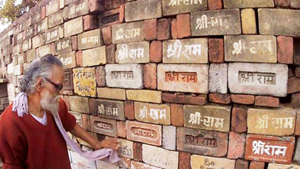 First, the BJP can now claim that two of the three issues that formed its ‘core agenda’ have been settled with the abrogation of Article 370 and the Ayodhya verdict. The third, Uniform Civil Code, is a work in progress. If a UCC were to be put in place in the coming months, then the BJP would have implemented its “core agenda.” That would open up space for a shift in its politics from identity to issues of contemporary relevance, for instance, the national economy. While triumphalism would be misplaced, the BJP would make the most of the popular perception that strong leadership and an overwhelming parliamentary majority are sine qua non for delivery. The possible rough edges of policy in the offing would be smoothened by success on the core agenda front.

Second, the Congress has been once again left holding the proverbial can although the process of liberating Ram Janmabhoomi in our times was initiated when the party was in power with a humongous parliamentary majority. As the Congress’s strength steadily declined, that of the BJP grew exponentially through the closing decade of the 20th century and the opening decades of the 21st century. The space that the Congress occupied has since been ceded to the BJP, potentially irrevocably. 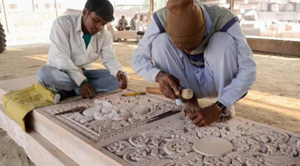 Third, the Supreme Court has reasserted the primacy of ownership of property, either by individuals or legal entities (in this case Sri Ram) underscoring the fact that this remains an inalienable Fundamental Right in our constitutional scheme. The deletion of Right to Property from the list of Fundamental Rights by the post-Emergency ragtag regime of conflicting ideologies was a monumental blunder which continues to erode freedom and restrict liberty. The BJP would do well to reconsider this exclusion and restore Right to Property where it belongs. If this right were to be once again made inalienable, fractious disputes like what has been witnessed in Ayodhya would dissipate even if they do not disappear entirely.

Fourth, the much-touted “Idea of India” as a utopian and idyllic state where secularism is a one-way street of limitless concessions needs to be discarded, if only for the damage it has inflicted on both polity and society. Faith, as the Supreme Court’s judgment tells us, cannot be subject to judicial scrutiny, nor should theology concern the state in a republic. The state must act in the best interest of the largest possible number of citizens without seeking to balance its decisions by conceding ground to one community or the other. That never works. India is what it is, a civilisational nation whose people are deeply religious. There is little or no scope to enforce borrowed ideas that are intrinsically antithetical to Hindu faith and belief.

The Verdict: Key Takeaways
• SC allots 2.77 acres of disputed land for the construction of a Ram temple
• The top court finds that Hindus were able to give better evidence of possessory claims
• SC says Hindus have historically prayed at the Inner sanctorum under the mosque dome as the birthplace of Lord Rama
• Centre told to set up a trust in 3 months to construct and manage the Ram temple
• The nirmohi Akhara will be 3 member of the trust
• Sunni Central Wakt Board to get 5 acres as restitution for desecration and eventual demolition of Babri Masjid on December 6, 1992. 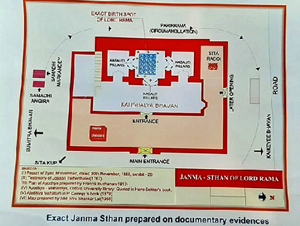 What Next After SC Judgment?
• A Ram temple in Ayodhya likely in 2-3 years. fell BJP & VHP functionaries
• An RSS functionary said the outfit would not focus on the disputes in Kashi and Mathura for now
• The Ram temple trust likely to be formed on the lines of Tirumala Tirupati Devasthanams or Shri mata Vaishno Devi Shrine Board
• VHP’s Ram Janmabhoomi Nyas will have representation in the upcoming Ayodhya trust
• All India Muslim Personal Law Board May go for a review petition which may be dismissed as such petitions go to the same bench. Petitioners also have the option of going for a curative petition, which may not go to the same bench.

Fifth, seven decades after declaring itself a republic, India must come to terms with its history. There is no percentage in whitewashing the past, as has been done by historians guided by state patronage and party ideology. That has only contributed to what a commentator had described during the height of the Ayodhya movement as the “past imperfect, future tense” syndrome. Soviet-style airbrushing of unsavoury bits and pieces of history has never worked, including in the country from where this fad to remould the truth to suit a state’s ideology travelled to India. It has long been argued that India must discontinue the practice of state writing of history. The time has come to dismantle India’s history project of Soviet era vintage. Mature democracies confront their past and move on to the future without allowing the present to be an undue hindrance. Nanny states feed their citizens with doctored history, a lot of which was iterated in the Allahabad High Court as well as the Supreme Court.

Last, though not the least, while the Supreme Court has instructed the Government of India to form a Trust to monitor the use of the land that has now been declared free of encumbrance and encroachment, this is a task that should really be community-driven. The state cannot and must not assume ownership of places of worship, either through trusts or boards, as that spawns problems of a different nature.

After the judgement on November 9, 2019, it’s time to move on. The past will never be entirely perfect, nor will the present be free of tensions that hark back to an imperfect past. It’s the future that should concern India and its people. There is no cause to think otherwise after the Supreme Court’s nuanced and correct Ayodhya Verdict that has served to erase the wrong done by Babur and his general Mir Baqi. 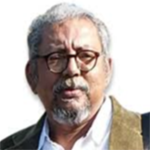 Kanchan Gupta is a Distinguished Fellow at Observer Research Foundation (www.orfonline.org). Born to Bangladeshi refugee parents, Kanchan Gupta was raised in Jamshedpur and Patna where he attended missionary schools. He later moved to Kolkata where he studied English literature, political science and economics at St Xavier’s College, University of Calcutta

why is ayodhya case in hindi

what is ayodhya case all about

Should I use my 401(k) to fund my child’s college education?
Upcoming Bollywood Movies in 2020