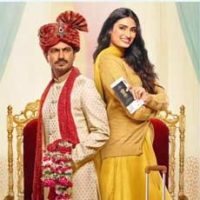 Another trailer released this month was Motichoor Chaknachoor, starring Nawazuddin Siddiqui and Athiya Shetty. Directed by Debamitra Biswal, it is a story of a 36-year-old man desperate to get married, and a girl who wants to find an NRI husband. The film will release on November 15.

Following a long hiatus after his first release in 2015, Sooraj Pancholi will be back on the big screen in Satellite Shanker. Sooraj plays a happy-go-lucky soldier of the Indian army who brings together the entire nation through his adventurous road trip. The film was directed by Irfan Kamal and will release on November 15.