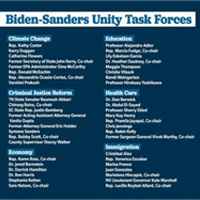 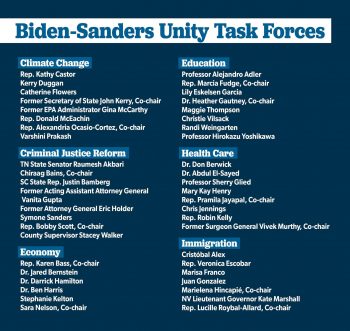 Senator Bernie Sanders endorsed Joe Biden, presumptive Democratic Party presidential nominee’s campaign and the multi-purposed Unity Task Force is one of the outcomes. It is a matter of pride that six well known Indian Americans from different areas of expertise have been chosen by the Unity Task Force to join. They have jointly selected a group of leaders and experts for their Unity Task Force with the goal of policy initiatives in six areas. These are climate change, economy, education, criminal justice reform, immigration and healthcare. The task force is expected to have a meeting ahead of the Democratic National Convention and put forward recommendations to the DNC Platform Committee and to Biden. The ultimate goal is to craft a possible agenda for Democrats in 2020.

Varshini Prakash, 26, co chairs the Climate Change Group along with former Secretary of State John Kerry. At 26, she is the youngest member and executive director of the Sunrise Movement, an organization targeting young people and their involvement in climate change. She gives credit to Bernie Sanders for the appointment. She is of the opinion that the movement can begin a Green New Deal under Biden if he is elected President. The country, she is alleged to have said, cannot afford another four years of Trump. Fox News latest poll survey finds that Biden leads Trump by 48-40 per cent. The race for the November polls is evenly poised.

Sonal Shah, a leading economist and former lobbyist is inducted into the Economy Task Force.