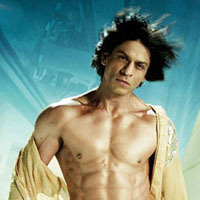 Om Shanti Om screened for less privileged children
Sixty-seven underprivileged children from the Hyderabad Council of Human Welfare and Government Boys Hostel for the Handicapped had a memorable time enjoying the luxury of watching Shahrukh Khan’s Om Shanti Om at Vijeatha Theatre in Borabanda. A local non-governmental organization organized this special screening of the popular film in view of the upcoming Children’s Day.

The forty children from the Hyderabad Council of Human Welfare from Alkapuri and twenty-seven physically challenged children from the Government Boys Hostel for Handicapped from Nalgonda Cross Roads were picked up in two luxury coaches, taken to the film, and treated like royalty.

Back to Back International Project for Celina Jaitley
Close on the heels of signing her first international film, Love Has No Language with Ben Mitchell, the blue-eyed beauty from Bollywood has signed her next, Quest Of Sheherzade.

Celina’s international negotiations are managed by the famous agent Brillstein Grey, and no doubt the results are fabulous. Quest Of Sheherzade, a legendary tale taken from the book, 1,001 Nights, is about a mystical warrior princess, Sheherzade. Celina is being trained by Nancy Banks, who has trained Hollywood celebrities like Orlando Bloom and Natalie Portman. Interestingly, the actor speaks 11 languages including German, and this has helped her garner this project as she is required to speak with a slight German accent for her character.

Music maestro Khayyam to receive Lata Mangeshkar Award
The prestigious Lata Mangeshkar Award, set up by the Maharashtra government, has been conferred this year to the music maestro Khayyam, whose evergreen compositions have mesmerized audiences for generations. The award is an annual affair. The function is organized by the Directorate of Cultural Affairs, Mumbai, in cooperation with the Maharashtra Information Centre in the national capital for the last 16 years.

Rani Mukherjee duped in land deal
Bollywood star Rani Mukerji was duped in a land deal worth Rs. 3.3 million because she failed to check primary documents. According to the sub-divisional office in Ahmed Nagar, Mukerji did not check the document popularly known as 7/12, which bears the name of the owner of the property. This small mistake is going to cost her Rs. 3.3 million and probably a number of trips to Nimba Korchali village near the pilgrimage town of Shirdi in Ahmed Nagar district where she has bought a piece of land. The property, which falls under the category of a new tenure land, can be bought only with the permission from a competent authority of the district.

According to SET sources, the acquisition underlines the strong relationship shared with the eminent producer/director, Mr. Yash Chopra, for well over a decade. Mr. Chopra expressed happiness that these films would be showcased on SET, which provides a great platform for the television premiere of the films.

Director’s Corner
After a long silence, Deepak Tijori has finally roped in Naseeruddin Shah and Tabu in his next directorial venture. Lead actors are yet to be determined and finalized. Tijori demands that his film will be purely commercial in nature, despite the fame of the given actors in experimental or independent movies. The production house is yet to be settled.

Ace director Rajkumar Santoshi is all set to direct Shahid Kapur and Katrina Kaif for PVR pictures. Reportedly, it is one of two projects that Santoshi is going to make for PVR’s Ajay and Sanjeev Bijli and for which he has signed a deal worth about 60 crores with them.

Director Rakeysh Mehra is very busy these days. On one hand, he is planning the film Bhairavi with the Bachchans, while on the other hand, he also has plans for Paanch Kaurav. The film will be a mythical opus, along the lines of Raiders of the Lost Arc and Lord of the Rings. It is a huge film with an estimated budget of Rs. 700 million. Bollywood’s top-notch production house UTV, which is laughing all the way to the bank after producing Mehra’s Rang De Basanti, has agreed to produce Paanch Kaurav. Moreover, Mehra is currently involved in the making of his autobiographical film about his childhood in Delhi’s Chandni Chowk entitled Delhi 6. Apparently, he has finalized Sonam Kapoor, who debuted in Saawariya, for the female lead. If things go according to Mehra’s plans, Abhishek will be seen playing the male lead in the film.