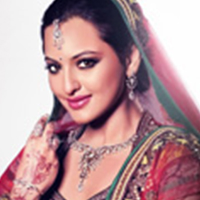 Sonakshi Sinha Needs No Image Makeover
Sonakshi Sinha is quite clear about her no bikini, no short skirts, no kissing funda. When asked if she would consider an image makeover, the pretty actress did not quite agree. She is extremely satisfied with her current Indian image and is not looking at making any changes in the near future. She is quite content with the workflow. She has several films in the pipeline giving her enough reasons to stick to the image she has created for herself. Be it her ‘adas,’ her looks or even her personality, here is one out and out desi gal.

Bebo set for new cheeky number
The much-hyped romantic comedy, Gori Tere Pyaar Mein, features Kareena Kapoor doing what she does best. Yes, the porcelain-skinned beauty is all set to burn the dance floor. Given the song’s cheeky lyrics, “gore gore, naughty, naughty, tere round round tooh,” (too in Punjabi means buttocks), audiences will know what to expect! This song will be released close to Bebo’s first anniversary, making it quite special. This song will also kick start promos for the eagerly awaited Imran- Kareena film.

Rekha to share screen with Big B
according to the rumors, Amitabh Bachchan and Rekha will recreate magic on the silver screen yet again. The two mega stars have been approached to play the roles of RDX and a wealthy fashionista respectively in Welcome Back. The film, a sequel of Anees Bazmee’s hit comedy film Welcome, will hopefully give the audience more reasons to go and watch this film. 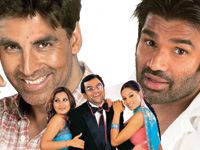 No Akki in Hera Pheri 3
kshay Kumar, Paresh Rawal, and Suniel Shetty have created chemistry like never before in the power brand, Hera Pheri. The three stars were even seen in the sequel that faired decently at the box office. But with the third film, there is a twist for the audience. Raju, the memorable character played by Akshay Kumar, might be missing in action. After his fallout with the film’s producer, Firoz Nadiawala, Akki has chosen to distance himself from the film. Akki also reasons that he has nothing new to offer to this role. Well, let’s see how the third installment turns out.

No Entry to feature 10 leading ladies
The Casanova image Salman Khan portrayed in Bomey Kapoor’s No Entry was a super hit. The sequel No Entry May Entry could be the icing on the cake for the womanising Prem Salman portrays in the film. Ten leading ladies are expected to share the screen with India’s most eligible on and off bachelor. The film will also feature Anil Kapoor sharing the male lead’s position as in the original film. The entire crew is being extremely tight lipped about the names of the girls and currently, various aspects of the casting are underdiscussion.

New cameo for Subhash Ghai
In the past, Subhash Ghai has donned the actor’s cap for various cameo roles in his films. Here is another chance for viewers to watch their beloved director on the big screen. His upcoming Punjabi Film, Double in Trouble, will be his next acting venture. His appearance is backed by the entire star cast, including Gippy Grewal and Minissha Lamba, who are keen to see the director on screen. According to Gippy, even a small shot of the filmmaker on a chair with the famous hat is good enough. According to Ghai, being a cameo is actually auspicious for the film. Then we say, go for it!