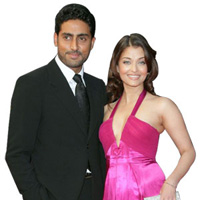 Abhishek and Ash Are No Lady or Gentleman

Some films are plagued with bad luck. Rajkumar Santoshi had to wait close to five years before he could get his film Ladies and Gentlemen started all over again. Only in the germination stage, Santoshi had already finalized on Abhishek Bachchan and Aishwarya Rai as the leading couple. And now, just as he seems to be getting things together, news of Aishwarya’s pregnancy have thrown things off for him again.

Right when Santoshi was ready to fall apart, John came in like a true knight in shining amour, ready to be every bit the perfect gentleman. Ask the ladies and they will vouch for it. And while Santoshi is doing all he can do get the film shooting before something else comes in his way, he is also careful about who he is casting. He is only going to take on newcomers for all other roles including the leading heroine and also the villain. While he claims that the industry is in need for fresh talent, we also think he means that he cannot take the strain of star power any longer.

Priyanka Ready to Serenade the World

Bollywood is quite used to actors lending their own voices. We do not mean just doing their own dubbing, but also singing in their movies too. What began innocently by Amitabh many years ago, then saw Aamir become the singer, and subsequently a slew of stars to follow suit. No one seems to be enamored when actors talk about doing a song in their film anymore. However, Priyanka Chopra has a different idea in mind.

Everyone knows of Priyanka’s talent as far as signing is concerned. Somewhere, sometime, people started to hear things about her desire to release an album of songs. It is now official. She is working hard on it, and hopes to have the album out sometime in January. The album, which is being produced by Universal Group is titled Desi Hits and will have ten pop songs all sung by Priyanka. While the songs will all be sung in English, they are certain to have an Indian flavor in them. Ask her why English, and Priyanka is quick to say that music has no language, and English has a better appeal among foreign audiences. Wonder if, like her acting, music can also take her to the number one spot?

The IPL may come and go with fresh auctions and faces year after year, and new film stars buying and supporting teams. However, there is yet another avenue where cricket and cinema are working even more closely. This is the CCL or the celebrity cricket league, where film actors of various regions fight it out against one another for supremacy and pride. In this fierce arena, Sridevi has stepped in to add glamour and sparkle to the event. She has decided to buy a cricket team, the Bangla franchise. This is not the first on the CCL, since Sohail Khan already owns the Mumbai team.

We all saw Sridevi and Boney Kapoor attend the first season of the CCL, and no one would have even imagined their designs. Sridevi has the glam factor needed, and we hope Boney has made some god calculations before making this decision. We can only wait and see what the next year has in store for them all.

Katrina Becomes Her Own Stylist

Everyone who sees Katrina Kaif cannot but love her. For her looks, her quiet innocence and all the charm she exudes, she is a clear favorite. What has also been noticed is the fact that she is always well dressed, whether in casual clothes for a day event, or even for a formal evening when completely made up, Katrina has a brilliance and an air of perfection around her. There is little wonder that the best person who can style Katrina is herself.

In the next movie that Katrina will be doing under the Yash Raj Films banner, she will style her own clothes. She is already doing what women love best, looking through stores for clothes and all the accessories, and has apparently even bought quite a few. To be made to shop until you drop, and have all your tabs picked up for you, life cannot get better than this. In the world of films, looking good comes at a price. It looks like Katrina’s price is being borne by someone else.