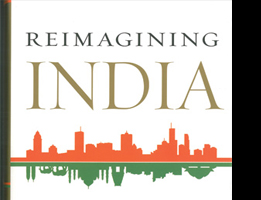 Reimagining India brings together leading thinkers from around the world to explore the challenges and opportunities faced by one of the most important and least understood nations on earth. India’s abundance of life— vibrant, chaotic, and tumultuous—has long been its foremost asset. The nation’s rising economy and burgeoning middle class have earned India a place alongside China as one of the world’s two indispensable emerging markets. At the same time, India’s tech-savvy entrepreneurs and rapidly globalizing firms are upending key sectors of the world economy. But what is India’s true potential? And what can be done to unlock it? McKinsey & Company has pulled in wisdom from many corners—social and cultural as well as economic and political—to launch a feisty debate about the future of Asia’s “other superpower.”

Over the next decade India has the opportunity to show the rest of the developing world how open, democratic societies can achieve high growth and shared prosperity. Contributors offer creative strategies for seizing that opportunity. But they also offer a frank assessment of the risks that India’s social and political fractures will instead thwart progress, condemning hundreds of millions of people to enduring poverty Reimagining India is a critical resource for readers seeking to understand how this vast and vital nation is changing—and how it promises to change the world around us.

About the Editors
Clay Chandler is McKinsey’s Asia editor. He is former Asia editor of Fortune magazine and has held a variety of other journalistic assignments, including chief economic correspondent and Hong Kong bureau chief for the Washington Post and Tokyo correspondent for the Wall Street Journal. Chandler is a graduate of Harvard University, where he studied politics, economics, and East Asian history. He is coeditor, with Heang Chhor and Brian Salsberg, of Reimagining Japan: The Quest for a Future That Works (Shogakukan, 2011).

Adil Zainulbhai is chairman of McKinsey India. Over the course of his thirty-four-year career at McKinsey he has served clients around the world and in a wide range of industries — among them public companies, government-owned companies, entrepreneurs, and startups. He also has advised governments on social and development issues. A Mumbai native, he returned to his hometown in 2004 as McKinsey’s managing director for India. Adil holds an engineering degree from the Indian Institute of Technology, Mumbai, and an MBA from Harvard Business School.

McKinsey & Company is a global management consulting firm, deeply committed to helping institutions in the private, public, and social sectors achieve lasting success. With over 100 offices in more than 60 countries, the firm is a trusted advisor to 90 of the world’s top 100 companies.