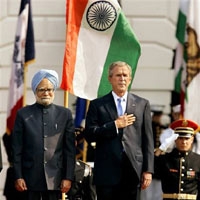 Here is a historic deal that has sealed India’s status as an upcoming nuclear power and has erased the decade old US policy with regard to this energy-starved nation, ushering India into the world’s exclusive nuclear club.

The nuclear deal will give foreign businessmen the opportunity to provide 20,000 megawatts of nuclear power for India-business worth an estimated $60 billion. Optimism over the deal drove
the Bombay exchange to an all-time record high.

“I have always been touched by your warm praise for India and the Indian people.
We sincerely acknowledge your deep personal commitment to a closer economic and strategic
partnership between our two countries,” the Prime Minister said.

This landmark agreement included a joint consensus on nuclear reactors, fuel and expertise, in return of the acceptance of international safeguards by the emerging Asian power.

This accord would end India’s long isolation as a nuclear maverick that defied world appeals and developed nuclear weapons. India agreed to separate its tightly entwined nuclear industry – declaring 14 reactors as commercial facilities and eight as military – and to open the civilian side to international inspections for the first time.

The nuclear deal will give foreign businessmen the opportunity to provide 20,000 megawatts of nuclear power for India-business worth an estimated $60 billion. Optimism over the deal drove the Bombay exchange to an all-time record high.

However, the agreement must be approved by Congress, and Bush acknowledged that might be difficult because India still refuses to sign the Nuclear Non-proliferation Treaty.

Segregation of the civilian and military nuclear facilities had been the obtrusive point in implementing the deal. But chief negotiators Shyam Saran and Nicholas Burns, who had been lucubrating for the past few days, rolled it out at the last-minute.

Indeed there was a general feeling if Bush had nothing to show on the nuclear deal, his visit would be deemed a failure. But now that an agreement on separation of nuclear facilities has been announced with much grandeur, plenty still remains to be done.

For the nuclear agreement to be formalized three important hurdles need to be crossed. One, US Congress has to make amendments to American laws regarding non-proliferation.

Two, US has to get approval from the Nuclear Suppliers Group before the deal can come through. Finally, the IAEA needs to prepare India-specific safeguards, so that nuclear rules and regulations that apply to NPT countries won’t apply to India.

It is likely that approval by US Congress might prove to be the biggest hurdle. There is considerable opposition to the deal in Capitol Hill and the Bush administration will have to pull out all stops to get it through.

Bush sounded confident that he would be able to convince Congress about merits of the deal. At an earlier speech delivered at Asia Society and while briefing the press in New Delhi, Bush has been at pains to link the deal with his energy policy.

He has said that the nuclear deal with India would help reduce global oil prices and that it would lead to use of cleaner energy and a better environment.

This is recognition of the fact that in future India, along with China, will be one of the largest consumers of oil as well as the world’s biggest polluters. Whether this argument will wash with US Congress remains to be seen.

“I’m trying to think differently, not stay stuck in the past,” said Bush, who has made improving relations with India a goal of his administration. Celebrating their agreement, Indian Prime Minister Manmohan Singh said, “We have made history today, and I thank you.”

The deal was sealed a day before Bush begins an overnight visit to Pakistan, a close ally struggling with its own terrorism problems.

The US-India nuclear deal was seen as the centerpiece of better relations between the world’s oldest and most powerful democracy and the world’s largest and fastest-growing one.

India has more than 1 billion people, and its booming economy has created millions of jobs along with consumer demands that have attracted American businesses. India’s middle class has swelled to 300 million – more than the population of the United States. Still, 80 percent of Indians live on less than $2 a day.

Bush acknowledged that Washington and New Delhi were estranged during the Cold War, when India declared itself a nonaligned nation but tilted toward Moscow. “Now the relationship is changing dramatically,” he said.

To honor India’s independence leader, M.K. Gandhi, Bush, in black socks, and Mrs. Bush in white slippers, laid a wreath at a memorial to Gandhi and bowed their heads for a moment of silence. They then walked around the slab of black marble, marking the spot where Gandhi was cremated in 1948, for the customary tossing of flower petals.

But it’s doubtful that what happened next is in any of the protocol books.

An Indian photographer apparently didn’t get the coveted shot of Bush throwing colorful petals on the memorial, and so called for a redo. With a somewhat quizzical look, Bush complied, and then threw even more petals to make sure photographers had snapped what they needed.

Bush and Singh announced new bilateral cooperation on issues from investment, trade and health to agriculture, the environment and even mangoes. Bush agreed to resume imports of the juicy, large-pitted fruit after a 17-year ban.

Besides nuclear diplomacy, Bush also succeeded at the mango maneuver or the mango diplomacy. During his visit to India last week, the US President, George Bush, said he was looking forward to eating Indian mangoes. Taking advantage of this statement, the Centre is trying to export mangoes to Washington this year itself.

India is the biggest mango producer in the world accounting for nearly half of the global production but it is only the third largest exporter.

Mango makes up 15 per cent of the total fresh fruits export from the country.

Barring a few hurdles, the Indian mango exporters face, in particular irradiation, they are upbeat and will try and drive home the advantage to export mangoes to the US.

Add India’s prime minister to the list of people giving President Bush a hard time for not visiting the country’s famed Taj Mahal.

As the leaders toasted each other and their nation’s ties before lunch alongside several hundred guests, Prime Minister Manmohan Singh briefly paused and addressed Bush’s wife, Laura.

“I am truly sorry the president is not taking you to Taj Mahal this time,” Singh said. “I hope he will be more chivalrous next time you are here.”

The president said Singh was not alone in his disappointment. “I’ve been hearing about it from Laura ever since I told her that we weren’t going,” Bush said.

The majestic 17th-century white marble mausoleum is a monument of love, built by Mogul Emperor Shah Jahan in memory of his favorite wife, Mumtaz Mahal.

But it’s in Agra, 130 miles east of New Delhi, a distance that apparently was deemed too far for the president, even to demonstrate his affection for the first lady.

“I have always been touched by your warm praise for India and the Indian people. We sincerely acknowledge your deep personal commitment to a closer economic and strategic partnership between our two countries,” the Prime Minister said.

Bush, on his part, appreciated the Indian hospitality and warmth extended to him and his wife once again and lauded the country’s human rights endeavor, its multiculturalism and religious tolerance.

Amidst the entire hullabaloo, the first lady Laura Bush broke off from her husband’s entourage, after being greeted on her debut trip to India with stately pomp and took off to visit the set of the Indian version of “Sesame Street.”

Mrs. Bush met the stars known to millions of Indian children. She taught counting to a 5-year-old inquisitive girl named Chamki and chatted with a giant, colorful lion named Bhoombah who believes he is a descendant of one of India’s many former kings.

The show is partly funded by the U.S. government and aimed at India’s 157 million children under age six – equal to more than half of the entire U.S. population. Mrs. Bush’s episode is expected to reach an estimated 40 million households when it airs in the coming months.

At the show’s set – designed to look like a middle-class Indian neighborhood – Mrs. Bush and Indian social activist Nafisa Ali met Chamki at a phone booth that doubles as cybercafe. Then they stopped outside a house to greet Bhoombah, who asked in his gruff voice how the first lady was doing.

“I’m doing great,” replied Mrs. Bush, who also visited the set of the Egyptian version of the show during a trip to Cairo last year. “I love to be with characters from Sesame Street.”

Afterward, she shot her scene with Chamki, who sat on a swing hanging from the branch of a tree as Bush and Ali helped her learn to count.

It took two takes, and then Bush headed out for “Prayas,” a home for adolescent boys and girls, that helps care for 50,000 neglected street children.

Meanwhile, in Pakistan, US President George W. Bush, an avid baseball fan, tried his hand at a sport hugely popular in parts of the old British empire-cricket- and was pronounced “not bad” for a first-timer.

He got a quick lesson on how to hold the bat from Shaharyar Khan, chairman of the Pakistan Cricket Board.

Then the president was coached while batting at the wicket by Salman Butt, a member of Pakistan’s cricket team, with Inzamam-ul-Haq, the team captain, nearby to also lend his expertise.

Bush, in a blue shirt with sleeves rolled up, played with tennis balls, which are much softer than stone-hard cricket balls.

Pakistan’s most famous-ever cricketer, former captain-turned-politician Imran Khan, spent confined to his home where authorities detained him to thwart his plan to lead a march to protest against Bush’s visit.

Bush has received more than a warm welcome from India. He will go back with many prizes firmly in his pocket. Widely regarded as the trip’s trophy is the deal for cooperation on civilian nuclear technology, which will give India access to U.S. nuclear know how and fuel. Certainly, it is a huge public success for Bush.