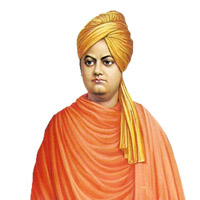 Christ the Messenger by Swami Vivekananda

The wave rises on the ocean, and there is a hollow. Again another wave rises, perhaps bigger than the former, to fall down again, similarly, again to rise–driving onward. In the march of events, we notice the rise and fall, and we generally look towards the rise, forgetting the fall. But both are necessary, and both are great. This is the nature of the universe. Whether in the world of our thoughts, the world of our relations in society, or in our spiritual affairs, the same movement of succession, of rises and falls, is going on. Hence the liberal ideals, are marshaled ahead, to sink down, to digest, as it were, to ruminate over the past–to adjust, to conserve, to gather strength once more for a rise and a bigger rise. The history of nations also has ever been like that. The great soul, the Messenger we are to study this afternoon, came at a period of the history of his race which we may well designate as a great fall. We catch only little glimpses here and there of the stray records that have been kept of his sayings and doings; for verily it has been well said, that the doings and sayings of that great soul would fill the world if they had all been written down. And the three years of his ministry were like one compressed, concentrated age, which it has taken nineteen hundred years to unfold, and who knows how much longer it will yet take! Little men like you and me are simply the recipients of just a little energy. A few minutes, a few hours, a few years at best, are enough to spend it all, to stretch it out, as it were, to its fullest strength, and then we are gone forever.

But mark this giant that came; centuries and ages pass, yet the energy that he left upon the world is not yet stretched, nor yet expended to its full. It goes on adding new vigour as the ages roll on. Now what you see in the life of Christ is the life of all the past. The life of every man is, in a manner, the life of the past. It comes to him through heredity, through surroundings, through education, through his own reincarnation–the past of the race. In a manner, the past of the earth, the past of the whole world is there, upon every soul. What are we, in the present, but a result, an effect, in the hands of that infinite past? What are we but floating wavelets in the eternal current of events, irresistibly moved forward and onward and incapable of rest? But you and I are only little things, bubbles. There are always some giant waves in the ocean of affairs, and in you and me the life of the past race has been embodied only a little; but there are giants who embody, as it were, almost the whole of the past and who stretch out their hands for the future. These are the sign-posts here and there which point to the march of humanity; these are verily gigantic, their shadows covering the earth–they stand undying, eternal! As it has been said by the same Messenger, “No man hath seen God at any time, but through the Son.” And that is true. And where shall we see God but in the Son? It is true that you and I, and the poorest of us, the meanest even, embody that God, even reflect that God. The vibration of light is everywhere, omnipresent; but we have to strike the light of the lamp before we can see the light. The Omnipresent God of the universe cannot be seen until He is reflected by these giant lamps of the earth–the Prophets, the man-Gods, the Incarnations, the embodiments of God. We all know that God exists, and yet we do not see Him, we do not understand Him. Take one of these great Messengers of light, compare his character with the highest ideal of God that you ever formed, and you will find that your God falls short of the ideal, and that the character of the Prophet exceeds your conceptions. You cannot even form a higher ideal of God than what the actually embodied have practically realized and set before us as an example. Is it wrong, therefore, to worship these as God? Is it a sin to fall at the feet of these man-Gods and worship them as the only divine beings in the world? If they are really, actually, higher than all our conceptions of God, what harm is there in worshipping them? Not only is there no harm, but it is the only possible and positive way of worship. However much you may try to struggle, by abstraction, by whatsoever method you like, still so long as you are a man in the world of men, your world is human, your religion is human, and your God is human. And that must be so. Who is not practical enough to take up an actually existing thing and give up an idea which is only an abstraction, which he cannot grasp, and is difficult of approach except through a concrete medium? Therefore, these Incarnations of God have been worshipped in all ages and in all countries.