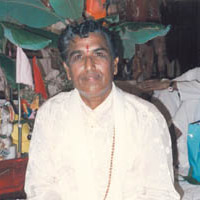 On May 17, 2010, the South Florida Community lost a great spiritual leader in the passing of Pandit Ramsurat K. Maharaj. Pandit Ramsurat was a pillar in our society providing leadership, guidance, comfort, encouragement and hope to the young, old, sick, and troubled individuals looking for a sense of purpose and direction. His comforting words and advice rebuilt many families and reshaped their futures. While we may never understand why he was taken away from us so soon, we’re appreciative for the time we had with him and his contributions to society.

Pandit Ramsurat K. Maharaj was born on October 14, 1941 to the proud parents of Rampat and Phoolbass Maharaj at Esperanza Village, California Trinidad W.I. He was lovingly called Surat which means “beautiful” and also describes his approach to life.

He attended Esperanza Canadian Mission School, which later became Esperanza Presbyterian School, where he also met the love of his life Savi, also known as Myroon.

He started his career weighing surgarcane, and he progressed to operating heavy equipment and machinery. Later, he joined Duprey Air as part of the maintenance crew and quickly became a crop duster flying planes.

In 1970 he migrated to St. Croix and later moved to Orlando, Florida. He continued his career in construction and worked on many of the bridges we travel on today. In 1978, he moved to North Lauderdale, where he raised his three lovely children Sharda, Shanta and Ravi until his passing. One of his greatest joys was the birth of his grandson Vijay Vollman. This made him a proud Grandpapa, and he enjoyed the “special moments” of this relationship. His grandson describes him as the “greatest Papa ever.”

Pandit Ramsurat Maharaj was a pillar of his society. He was dutiful to the community in which he lived by serving on multiple city, airport and housing authority boards. He brought his culture to South Florida and presented it in a format that was understandable to followers of all ages. He was also the Founding Father of the Florida Hindu Organization.

Pandit Ramsurat Maharaj was well-traveled and versed in culture and religion. He stood for a lot of things but his greatest lesson to us all is to “live properly and die consciously.”