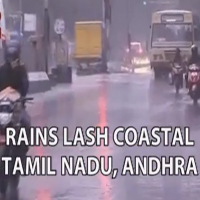 Over 9000 people evacuated along the coast in Nellore.

Tamil Nadu government issues advisory to affected areas and residents are advised not to venture out of houses between 1pm and 4pm and schools, colleges closed.

Over 15 teams of NDRF have been deployed in various coastal regions of Tamil Nadu and Andhra Pradesh which are on high alert due to the approaching cyclonic storm.

Andhra Pradesh is also on high alert. Two naval ships have also been deployed to tackle the situation.

Rail and flight services in Chennai have been affected by heavy rain and strong winds. Around 25 incoming flights, including those from international destinations, were diverted to Hyderabad and Bangalore airports due to strong winds and poor visibility. Nearly 25 outbound flights were delayed.

The Southern Railway has announced suspension of services on the Chennai Beach and Velacherry MRTS route. Similarly some suburban rail services have also been suspended until further notice. Some passenger trains coming to Chennai and leaving the city were also diverted.

In view of strong cyclonic storm Vardah, the Puducherry government also took precautionary steps to prevent tourists and other people from going close to the sea shore. Police personnel were deployed on the entire two-and-a-half kilometre stretch of beach road and barricades were also put on all roads close to the sea shore. All schools and colleges are closed today.

Special meetings of the officials of Revenue and Disaster Management Department to ensure that all necessary arrangements were took place.

Over 9,400 people living along the Bay of Bengal coast in SPS Nellore district of Andhra Pradesh were today evacuated to relief camps amid heavy rains due to the influence of severe cyclonic storm Vardah.

Eight fishermen belonging to Tamil Nadu were rescued from the sea near the Sriharikota High Altitude Range while search was on for ten more persons feared trapped at sea.

With the cyclonic storm Vardah set to make landfall between Sriharikota and Chennai, a state of high alert is being maintained in SPS Nellore district.

The Chief Minister reviewed the situation through teleconference and asked the official machinery to remain on high alert to prevent loss of lives. The holy Tirumala Hills have been receiving rainfall since last night, causing some hardship to devotees visiting the shrine of Lord Venkateswara.

IMD Head Scientist Dr M Mahapatra said that the cyclone would move to southern Karnataka after staying for 6 hours in Chennai and areas around.

Officials have been constantly monitoring the situation and are in constant touch with state govt. authorities & agencies.

The armed forces have also been asked to be on standby. The army, navy and air force were prepared to be deployed anytime as and when required.