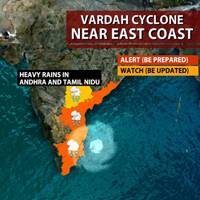 Do’s and don’ts to prepare yourself for Cyclone Vardah

Government has been continuously monitoring the Cyclone Vardah situation. Fishermen have been advised not to venture in the sea along south Andhra Pradesh, north Tamil Nadu and Puducherry coasts.

A control room with helpline numbers has been set up to monitor the relief effort. The Cyclonic storm Vardah, which was earlier expected to weaken considerably, may not see its intensity going down when it makes landfall near Chennai today. So here’s what you should do to prepare for it.

Authorities are fully prepared to tackle any eventualities in the wake of Cyclone Vardah.

Fishermen have been advised not to venture in the sea along and off south Andhra Pradesh, north Tamil Nadu and Puducherry coasts during next 48 hours as the sea condition would be rough.

Meanwhile, here are some do’s and don’ts that one must keep in mind.

Listen to the radio for regular updates and stay away from low-lying, coastal areas.

Keep valuable documents in water proof bags so that they aren’t damaged or lost in case of flooding.

During the cyclone, stay indoors. Keep door, windows closed. In case you are outdoors, avoid taking shelter under trees, old, damaged buildings as they may collapse leading to injury.

Avoid using rail and water transport. Be careful not to touch power lines. Do avoid staying in the top floor of house as winds speeds are high.

After the cyclone, do not enter damaged buildings. Use mobile phones sparingly so that lines don’t get clogged.

Venture out only after an all is clear declared. Once you step out, watch out for electricity poles. Stay away from flooded areas.

At home, do not use the toilet if water pipes are damaged and do not pay heed to rumours and volunteer to help authorities in tackling with the aftermath.