Dhoni to spend two weeks working for the Indian Army 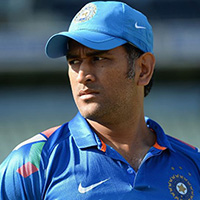 MS Dhoni’s version of down time after a World Cup campaign that took him and his team very nearly to the final itself is to spend a fortnight with the Indian territorial army, an auxiliary unit of the Indian army.

The 38-year old wicketkeeper had expressed his unavailability for the tour of West Indies next month and will instead head to the Kashmir Valley. There, he will join the 106 Territorial Army Battali

“As requested by the officer and approved by Army Headquarters, he will be performing duties of patrolling among other such activities and would be staying with the troops,” a spokesperson for the Indian

Dhoni, an honorary Lieutenant Colonel, was even seen playing India’s first World Cup game with gloves that carried a symbol similar to his regiment until the ICC requested that he remove it because it was against protocol.