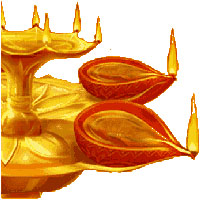 Diwali the Festival of Lights

India is a land of festivals. Hindus, Muslims, Christians, Buddhists and Jains, Sikh, Jews, Parsis and many others of different faiths and traditions celebrate various kinds of festivals during the year. There are a few festivals which are celebrated by all. Diwali is one among them.

Hindus wherever they have settled in the world celebrate a number of festivals during the year. These festivals bring people together and add a new dimension to the other wise humdrum life. Although most of Indian festivals are religious by nature, yet they have mythological, cultural, ethical, social and spiritual appeal. The festivals teach us to be pure, physically and mentally, and help the people in resolving conflicts and hatred and bind them together for a harmonious living and welfare. As India is known for her cultural and regional diversities, the celebrations of festivals may vary from one region to the other, but the essence and spirit remains the same through out the country and all over the world, where the Hindus reside. Among these festivals, Diwali is celebrated with great pomp and grandeur by Hindus all over the world. Diwali is an inter-religious festival in Africa, Fiji, Guayana, Malaysia, Nepal, Singapore, Sri Lanka, Surinam, Trinidad and Tobago and other countries.

Diwali the Festival of lights

Deepawali is a Sanskrit word for “Diwali.” Deepavali means a series (avail) or row of lights (Deepa). The people in North India call it as Diwali. The festival is celebrated either for three or five days commencing with the dark fortnight of Ashwayuja month and the first two days of the bright fortnight of Kartika month according to Hindu lunar calendar. Generally it comes during the pleasant autumnal months of October – November. During the festival, the women light lamps at dusk, decorate homes, business people decorate their establishments with lights and children burn a variety of crackers. Needy are given donations. Special services are held in temples. Generally in North India, people celebrate it for fives days beginning with the 13th day of the dark lunar month called Dhana Trayodashi or Dhan Terash. This day is earmarked for welcoming goddess Lakshmi who is the Goddess of wealth, beauty and prosperity, and is the consort of Lord Narayana. People buy new clothes, household goods, and office supplies for the New Year. Businessmen start new account for the New Year.

The second day which is the fourteenth day of dark moon is celebrated as a victory of Lord Krishna over tyrant Narakasura, who ruled the kingdom called Pragjyotishapura. According to an account in the Ramayana, after the killing of Ravana by Rama, his trusted devotee Hanuman flew from Lanka to Ayodhya and informed the triumphant arrival of Rama’s party back to the kingdom. This day has a special significance for worshipping Mother Kali for those who worship goddess Shakti. 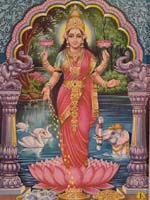 On the third day goddess Lakshmi the presiding deity for wealth and prosperity is worshipped and the business community worships Her with great enthusiasm and open their new financial year and account books that day. According to a mythological story, Lakshmi arrives from her abode called Vaikunta on that day and visits those houses and business establishments, which are lit up with the row of lights (Diwali).

The first day of the bright fortnight of Kartika month is in great honor of Bali, the demon king. Hence people greet Bali the emperor on this day and also worship Lord Shiva in the evening. For certain regions of India it is also a beginning of a new lunar year of “Vikram Samvat.” Vikramaditya was a great emperor in whose memory the counting of years has begun. Currently it is 2060 of Vikram Samvat (in AD 2004).

But in most places in North India the fourth day is celebrated as a day of victory of Krishna over Indra. The denizens of Gokula were worshipping Indra. Once they offered worship to mount Govardhana. Indra became furious and arranged for torrential rains, creating havoc among the residents. Krishna came to their rescue and held the mount Govardhana on his index finger thus sheltering the whole village. Hence in some states in India such as Rajasthan and Maharashtra, people prepare a hillock of food and feed one and all.

On the fifth and final day of Diwali which falls on the second day of the bright fortnight of the month, brothers visit the houses of sisters and offer sweets and gifts. Sisters prepare and offer a regale food and gifts to the brothers. Mythologically, Yama the god of death had visited the house of his sister Yami and had lunch with her on this auspicious day. This festival is symbolic of the continued share and protection of parental treasures and property. 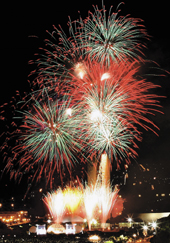 The Diwali season finds people decorating the entrances of their houses with mango leaves which emanate sweet fragrance and act as a disinfectant and is symbolic of prosperity, joy and peace. Diwali helps Hindus in pursuing the four fold values of life (Moral, economic, emotional and spiritual values). The lamp represents the five gross elements of the universe (earth, water, fire, air and ether) as the lamp is made out of clay, the oil is in the liquid medium, and wick shines with the help of air and is symbolic of ether. Diwali is indicative of triumph of light over darkness, the good over evil, truth over falsehood and knowledge over ignorance. Eating of roasted or puffed rice during the festival is indicative of the annihilation of the innate desires in us. Taking an oil bath during the Diwali day is like taking a holy dip in Ganges, the most sacred river of India. Rama who was born and brought up in Ayodhya returned on Diwali day after an exile of fourteen years. Krishna who resided in Dwaraka in the West went to North east and killed Narakasura. Thus these two historic heroes united India from North to South and East to West.

For the millions of Hindus living overseas, Diwali is an occasion for a family reunion like the Thanksgiving Day celebrations of the USA. Diwali celebrations are becoming extremely popular in the West. Hon’ble George Bush, the President of the United States, invited Indian Americans to celebrate Diwali in the White House in 2003. Thus Diwali became a festival of international integration in this era of global village and in the annals of American and Indian History. 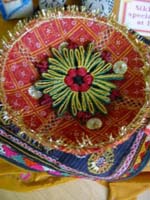 The Indian festival of lights held around October 25th. Guru Amar Das institutionalized this as one of the special days when all Sikhs would gather to receive the Gurus blessings at Goindwal. In 1577 the foundation stone of The Golden Temple was laid on Diwali.

On Diwali 1619 the Golden Temple was illuminated with many lights to welcome home and celebrate the release of Guru Hargobind from imprisonment in Gwalior fort.

The kind Guru ji refused to leave the fort of his own and demanded release of other 52 Hindu Rajas. The Moghuls being the cunning rulers they were, decided on a compromise. They said all the Maharajas that can hold onto your Chowla (gown) could walk out free along side you. The Sikhs smartly made a special Chowla with 50 long strips and all the prisoners walked free. Guru Hargobind ji is known as Bandhi Chhor because the imprisoned ones (Bandhi) were released (Chhor) by Him. Upon their return to Amritsar grand celebrations were held. Harmandir Sahib ji (Golden Temple) was illuminated and fireworks were displayed. Gurbani Kirtan (Hymns) and prayers were performed.

Guru ji was always prepared to sacrifice his own freedom for the sake of other innocent people. Once Guru ji was accompanying Jahangir, then, a tiger attacked Jahangir. He fired all his shots/arrows but missed attacking on tiger. His accompanying officers failed to respond to his distress call. Brave Guru ji got off His horse and put the tiger to rest with His sword. This incident made Jahangir feel obliged to Guru ji for having saved his life and he began to repent for the sin he had committed by ordering assassination of Guru Arjun Dev ji (Guru ji’s father). He visited Guru ji’s mother, Mata Ganga ji and apologized for the cruelty. Guru ji demonstrated the extreme and difficult virtue of “forgiveness” when He saved Jahangir’s life from an attacking tiger, despite all the hostility and the awful act of ordering assassination of the 5th Guru, Guru Arjun dev ji with an excuse that the latter was a threat to Islam

Sikhs have continued this annual celebration with lamps being lit outside gurdwaras and sweets distributed to all. The largest gathering happens at The Golden Temple which is lit up with thousands of lights.

There is also Diwali. There are two versions of history of Diwali but I believe in the Sikh version. The Sikh account begins in 1577. On the day of Diwali a foundation stone for the Golden Temple was laid in Amritsar.

This is why it is so special to the Sikh community an for me. It was the beginning of the Golden Temple’s creation. Another reason why Sikhs believe in Diwali is that this was the day when one of the ten Gurus, Hargobind Sahib got released from jail. He was jailed for standing up to his belief.

On the day of Diwali, which is usually in October/November, my mother places little diva lamps around the house as these lamps are what symbolise diwali. Some years, my family even set off fireworks in commemoration. These festivities are very close to me and every one is special as the other.

Enchanting Cities of West Bengal
WHY WE SEEK HAPPINESS?