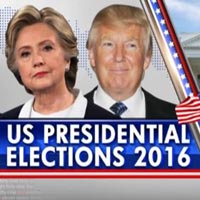 Donald Trump is the next US President

A record 46.2 million of the estimated 200 million voters have exercised their franchise in the 2016 US presidential elections before the official voting day, surpassing the 2012 record when 32.3 million people had voted in advance.

Clinton registered her first ‘win’ in the 2016 elections by four votes to two against her Republican rival Donald Trump soon after midnight in the remote northeastern part of the US.

The first votes of the election were cast, just after midnight, by the residents of Dixville Notch, New Hampshire.Clinton captured four of Dixville Notch’s eight votes while her Republican rival Trump received two, Libertarian Gary Johnson received one vote, and there was even one vote for Mitt Romney.

Unlike in India, every US state counts and declares its result once the polling is over.

In the case of Dixville Notch it used the provision of New Hampshire which allows village and habitants of less than 100 to cast their ballot just beyond midnight.

Dixville Notch has been voting at midnight every election since 1960.

Making the last push on the last day for the Hillary campaign, Tens of Thousands turned out for Hillary Clinton and President Obama where they made the last minute pitches.

Addressing the packed-out crowd of thousands in Independence Square, President Barack Obama said that the progress made by America in the last eight years of his administration “would go down the drain” if the Democratic presidential nominee does not win in the polls.

Making her last speech to impress the nation, Hillary Clinton exhorts voters to vote for safeguarding the core values of the nation.