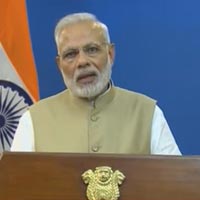 High denomination notes of Rs 500 and Rs 1000 will no longer be legal tender from midnight tonight, Prime Minister Narendra Modi announced as he declared a “decisive” war against black money and corruption while disclosing a raft of steps to assure commoners that their money is safe.

In his first televised address to the nation two-and-a- half-years after assuming office, he announced a 50-day window from November 10 to December 30 for those having these notes to deposit them in their bank and post office accounts “without any limit”.

He also said that new notes of Rs 2000 and Rs 500, with completely new design, will be introduced. Officials said such notes have already been reached to banks to prepare for their circulation from November 10.

“Based on past experience, the RBI will hereafter make arrangements to limit the share of high denomination notes in the total currency in circulation,” Modi said. Banks will remain closed on Wednesday and ATMs will also not function tomorrow and in some places on November 10 also.

In the first few days, there will be a withdrawal limit of Rs 2000 per day per ATM card. This will be raised to Rs 4000 later.

Similarly, keeping in mind the supply of new notes, in the first few days, there will be a limit of Rs 10,000 per day and Rs 20,000 per week. This limit will be increased in the coming days.

Rs 500 and Rs 1000 notes can also be exchanged for lower denomination currency at bank counters and select post offices till November 24 with a cap of Rs 4000 per day.

From November 25, the cap will be raised. Banks will open additional counters and work for additional hours to deal with the rush of people wanting to deposit or change notes.

There may be some who, for some reason, are not able to deposit their old Rs 500 or Rs 1000 notes by December 30, 2016, he said, adding they can go to specified offices of the RBI up to March 31, 2017 and deposit the notes after submitting a declaration form.

In his address, first in Hindi and later in English, Modi, whose government had implemented two schemes for unearthing of black money both domestic and abroad, said Rs 1.25 lakh crore belonging to the “corrupt” people has already been brought out in the open.

“There comes a time in the history of a country’s development when a need is felt for a strong and decisive step,” he said, asking political parties, all governments, social organisations and media to participate in the war against black money “with enthusiasm to make it a success”.

He conceded that there could some inconvenience to people in implementing the measures and asked them to bear with it.

The notes of Rs 500 and Rs 1000 “will not be legal tender from midnight tonight” and these will be “just worthless piece of paper,” Modi said.

Community News November 2016
Donald Trump is the next US President