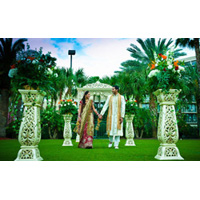 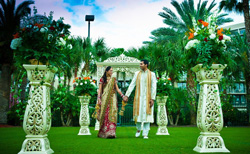 Very few fortunate people are lucky enough to get what they want. Though everyone dreams, only a few eventually see their dreams turn to reality! Two such fortunate people, Kavita Bahl and Prashanth Kolli, recently tied the knot at one of the world’s most favorite holiday destination.

Kavita and Prashanth Kolli, both aged 31, got married on February 18, 2012 amidst much grandeur and glitz. Their wedding celebration displayed the most elegant and perfect style one could desire. Thanks to proper organization that was incorporated in celebrating their wedding ceremonies and the able assistance of their wedding planner Hameant, Kavita and Prashanth were married in Orlando, Florida, with 300 guests in attendance.

It all began nearly two years ago, when the couple started dating. The sound of wedding bells soon began ringing melodiously for the couple. After a year and a half of courtship, Prashanth proposed to Kavita. What followed was the engagement of Prashanth and Kavita, with a wedding six months down the line. The time line certainly called for meticulous wedding planning to be done with the help of a proficient wedding planner. Hameant was introduced to the family, and he helped enable smooth functioning of the whole process.

Kavita’s dad took charge of the big picture such as hiring of vendors and managing of time lines, while her mother took interest in managing more articulate things for their beloved’s daughter’s wedding. Contrary to everyone’s belief, the wedding was planned in a short span of six months. 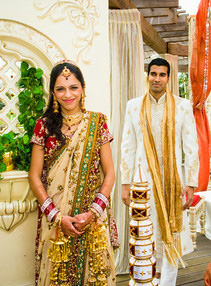 Hameant was instrumental in picking a suitable venue as the wedding destination for Kavita and Prashanth. The Orlando Marriott World Center is one of the largest amongst the Marriott chain of hotels, and was appreciated by the entire family as the ideal wedding venue for the couple’s wedding. With the large ballrooms and entertaining space the Orlando Marriott World Center offers its clients, the family had many options from which to select for various ceremonies. Apart from the restaurants, pools, golf courses, and spas housed within the premises of Orlando Marriott World Center, its location fasc-inates one and all. Situated right outside the world famous Disney World, guests could enjoy every moment of their stay while the wedding festivities were not being conducted.

The pre-wedding function started with a bang with the sangeet held in the most elegant manner. The arrangements made the sangeet exude sheer grace, thus rejuvenating the whole atmosphere. Jyoti Patel of Delightful Events, Orlando, handled decor for the sangeet and all other ceremonies. 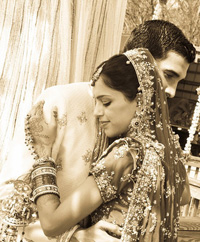 The sangeet function, as is usually the case, was held in a smaller ballroom of the Marriott. The decoration was very subtle, conveying traditional extravagance in the simplest manner. The tables and chairs at the venue were formidably covered in white cloth. While the white cloth covering the tables contained colorful cloth squares with lanterns and tea lights standing erect upon them, the white covers on the chairs were decorated with golden bows. In the most traditional manner one could sight, a mehndi artist was situated under a white and teal umbrella with a variety of seating placed before her for the guests. The food bar was transformed into a ‘dhaba,’ rendering its guests four types of ‘dhaba’ servings. The guests’ dhaba options included Asian, Mexican, Indian, and Italian. The stage was the center of attraction with a traditional jhula, well decorated in tandem with the overall decor of the ballroom, on which Kavita and Prashanth sat. 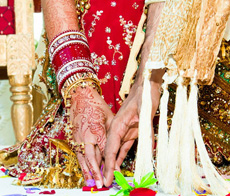 The theme wedding ceremony was elaborately decorated to exude the exclusivity rendered to suit the overall ambience of the venue. The afternoon wedding was an outdoor ceremony with a Jodha Akbar mandap occupying the center of the venue. Situated just across a golf course and overlooking a pond, the venue was lit with an enhanced natural grandeur, as rightly so desired by its organizers and the couple. The venue comprised of a wooden terrace decorated by gold and salmon colored draping. The aisle contained an arch along six Jodha Akbar pillars with large rose centerpieces creatively placed on each side. Although the wedding ceremony was intended to be simple initially, the ample space provided by the venue helped Jyoti Patel manufacture last minute detailing and insights into the whole decor, making the venue look simply superlative and fascinating.

The guests, who were seated on white garden chairs adorned with vertical salmon colored sashes, were sure to have a splendid time of their life! The ceremony was conducted by an event management company from India, taking care of every detail in the arena of music and entertainment. DJ Gaurav played a variety of music, from soothing Enya to happy Indian Vidai music from Khal-nayak. In fact, immediately after the arrival of the baraat, Prashanth walked down the aisle alongside Kavita’s parents to the tunes of ‘Sajanki Gharaaye’ from Kuch Kuch Hota Hai. The ambience was simply enthralling with one the most joyful moments experienced by each of the invites. Alongside the beat of the music, cocktails flowed freely, foreshadowing the fun and frolic to come.

The wedding reception added more glory and displayed the best party theme of the entire event. The newly married couple was introduced to the song ‘Deewangi’ from Om Shanti Om, followed by ‘Run like Hell’ from Pink Floyd. When the guests were seated, the first official dance was performed by Prashanth and Kavita setting the stage on fire to the tune of “All my life’ by K-Ci and JoJo.

Later, Kavita danced with her father to Paul Simon’s ‘Father and Daughter.’ Many other father’s and daughter’s from the invites later joined Kavita and her dad. Prashanth also danced with his mother to Josh Groban’s ‘You Raise Me Up.’ The reception party became increasingly flamboyant as the evening faded, with music including bhangra as well as American chart toppers being played throughout the night. The dhol player rendered the best support to the overall flavor of music, making the beat more stupendous.

The party ended on a very promising note, but Kavita certainly has a few pointers that couples should consider when making their wedding plans. First, if certain minor things cannot be completed, one should refrain from worrying about them, as they will not be noticed in the midst of fun and frolic. She encourages couples to take advantage of professional wedding vendors, as they simplify much of the work making the entire process much more enjoyable. Kavita and Prashanth’s dream wedding came true mostly due to their wedding planners.