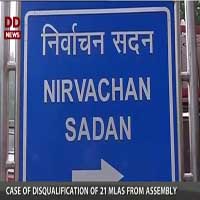 The Election Commission will hold a hearing on Thursday for 21 AAP legislators, who have been made parliamentary secretaries and are facing the risk of disqualification from the Assembly, in the office of profit case.

At the first hearing, the commission may also decide on whether to hear all the MLAs together or individually.

On 13th March 2015, AAP announced appointment of 21 parliamentary secretaries to assist the Delhi government ministers and issued a notification in this regard.

Till now in Delhi, only the Chief Minister had a parliamentary secretary and not the other ministers.