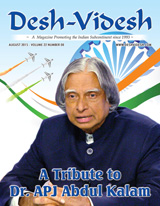 It just happened that we cover two subjects in this issue which are very important to every Indian and every Hindu, a tribute to President Dr Kalam, and Vedic or Hindu science.

First, let’s talk about former Indian President Dr. Kalam. While paying last respects to the former president, Honorable Prime Minister Modi rightly stated, “Bharat has lost her Ratna.” Before becoming President, Dr. Kalam was awarded the highest Indian civilian award, the Bharat Ratna. In my humble opinion, he was more valuable than a Bharat Ratna, more popular than the People’s President, and more visionary than missile man. Reading his life story, it is difficult to describe Dr. Kalam in a few words. Without offending my life time hero Gandhiji, I am inclined to call him “Mahatma Abdul Kalam.”

To justify my opinion, let me cite two events that many people may not know. While Dr. Kalam was President of India, his family members (about 50) came to see him at Rashratpati Bhavan in New Delhi. They stayed for a few days with him. He told his secretary P. Madhavan Nair to keep account of every rupee the government spent on his family members. After the family left, Kalam made a payment of Rs. 3,52,000 from his personal account to the government.

The second noble thing was when he became President. He called Amul’s founder Dr. Verghese Kurien and asked, “Now that I have become the President of India, the government is going to look after me while I am living; so what can I do with my savings and salary?” Dr. Verghese Kurien suggested he donate to a charity. So Dr. Kalam donated his salaries and life savings to PURA (Providing Urban Amenities to Rural Areas), a trust he founded.

I could go on and on with similar anecdotes about Dr Kalam’s life. In reading them, who would not agree when I say he was another Mahatma.

Now let’s discuss the Vedic Science article written by South Florida’s own Faren Rajkumar. She won first prize in a essay competition hosted by the Vedic Society. When I was doing research for my own book Chronology of Hinduism, recently published by Desh Videsh Media Group, I found that Vedic or Hindu science is a hot topic. Dr. Alok Kumar, a very good friend of mine and author of Sciences of the Ancient Hindus, explains Vedic or Hindu science in greater detail with scientific proof. It is about time all Hindus come forward and claim ownership of things which belong to us.

Before I get carried away in my own thoughts, let me stop right here until next time!