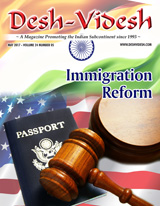 Every year, our May issue is about Immigration, which is especially timely given that immigration has been a very controversial topic. During the last two years, many politicians including President Trump, have made statements about immigrants, especially illegal immigrants, building wall against US- Mexico border, and sanctuary cities. Reform of immigrations laws and policy has been at the forefront of President Trump’s agenda. After taking office, he revised some of the statements made during the presidential campaign.

This issue features articles on upcoming changes to immigration law, including H1-B visas. Mainstream media, South Asian publications, and bloggers, offer their interpretation of the facts creating confusion and frustration among immigrant communities, including our own. There has been some discrepancy in the reporting of salary requirements for H1-B applicants. For those with questions about changes in the law, it is best to consult documents released by the administration* or with an immigration attorney rather than rely on hearsay.

It should be noted that President Trump is in favor of changing the way visas are currently awarded. He points out, “Right now H-1B visas are awarded in a totally random lottery and that’s wrong. Instead, they should be given to the most skilled and highest paid applicants and they should never, ever be used to replace Americans.” Large, established corporations have an advantage within this system as they can submit a larger number tickets into the system. As such, the owner of a smaller IT firm would not have much of a chance to secure an H1-B visa for a potential employee.

Though the topic is a controversial one, I’m sure many of our community members would advocate a review of the H1-B program to make the process more transparent and easy to navigate.

Post Views: 1,341
For Here or To Go Explores Hardships of an Expiring Visa
Neha and Sanjay