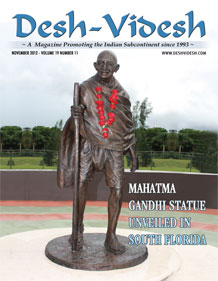 As we approach another Diwali, let me first discuss a subject that is near and dear to my heart.

This month’s lead article, “Gandhi Conquers Yet Another Land in America,” goes beyond the title indicates. Gandhiji captures the hearts of thousands of non-Indian men, women and children in America. When Joy Kutiyani, President of Kerala Samaj, proposed erecting a statue of Gandhi in the Town of Davie, Mayor Judy Paul did not hesitate. When Mayor Paul called a special council meeting, members took time from their busy schedule to give approval. Then, major support came from Matt Glenn, President of Big Statues in Provo, Utah, along with the Sculptor’s Guild. They decided to honor the greatest personality of the 20th century by undertaking to sculpt the seven foot bronze statue of Mahatma Gandhi for the Town of Davie and contributed $35,000 toward the cost of the statue. As a lifelong admirer of Gandhiji, I am not surprised but I am definitely overwhelmed by the support. Approval from the City Building department quickly set the plan in motion, and so began fundraising in the South Florida Indian community and construction by a local Indian-owned construction company. The final surprise, or icing on the cake, was when former President of India, Abdul Kalam arrived to inaugurate the statue.

This year, October 2 – the birth anniversary of Gandhiji, was really a golden day for South Floridians. We could not ask for better day to inaugurate the statue in our own backyard, and we could not ask for better person to do the honors. President Kalam, with his love for world peace, honored us by coming to South Florida. His speech, printed in this issue of Desh-Videsh in its entirety was inspiring not just for Indians, but also for everyone present.

On behalf of the South Florida Indian community, I would like to thank Kerala Samaj and the many individuals who came forward to help this project.

Finally, I wish all our readers a very Happy Diwali and Happy New Year.

As noted by Ranjani Verma in this issue, on the auspicious day of Diwali “share the light and let the warmth spread all around you. With the right attitude and approach, you will see the world soon become a much better place.”