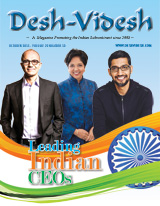 At one time, professional Indians leaving India to seek opportunities in other countries were considered to be a “Brain Drain” for India. On September 27, 2015, Prime Minister Narendra Modi addressed a crowd of over 30,000, which included Indians and Indian Americans, in San Jose, California. He said that “no one ever thought that brain drain can become a brain gain. This is actually a brain deposit.”

Prime Minister Modi is of course right. Indians living in the United States as well as all over the world have earned top positions at several multinational corporations. And these Global CEOs, directly or indirectly, help India. In this issue, we discuss the accomplishments of Global CEOs who emigrated from India and have reached the top: Sundar Pichai, CEO of Google; Satya Nadella, CEO of Microsoft; Indra Nooyi, CEO of PepsiCo; and Shantanu Narayan, President & CEO of Adobe. Their stories are a true inspiration for all Indian youth.

Speaking of Indian American youth, let me now discuss Florida’s own Simran Vyas. Simarn, who emigrated from India not too long ago, is making her way to the top in front of our eyes. In our July issue, Simran was a featured Valedictorian. Now she has another feather in her cap, the Amit Talati Award from the South Florida Hindu Temple!

October marks the beginning of a festive season – Navratri-Garba, followed by Diwali, Thanksgiving, and Christmas. This issue, Rina Shah, CEO of PR firm The Arpan Group, has reviewed a children’s book, Let us Celebrate Diwali, a must read for all this season!

Last but not least, “here comes the bride!” We met so many brides at our Orlando MyShadi Bridal Expo. Once again thank you very much to all our loyal vendors, sponsors, and attendees. Without your support, we could not have done it.