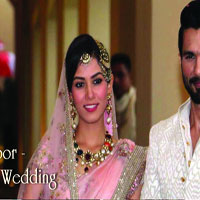 Actor Shahid Kapoor and Delhi-based Mira Rajput tied the knot in a low-key ceremony in Delhi on July 7, 2015. The much awaited nuptials took place at industrialist Shivinder Singh’s farmhouse in Rajkori (Delhi) and were attended by only their close relatives and friends. The two exchanged their vows as per traditions of the Radha Soami sect, a philosophical organisation that combines the spiritual teachings of all religions. Both families are active followers of the group, and it is believed that Shahid first met Mira, a third year English (Hons) student at Lady Shri Ram college through a ‘satsang’ of the group.

For the Vivah, Shahid chose a white shervani designed by friend Kunal Rawal, while the blushing bride wore a rose tinted lehenga designed by Anamika Khanna. After the much-guarded wedding ceremony, Ragi Bhai Harjinder Singh Srinagar Wale performed a Kirtan, to ring in the good spirits. Later, a celebratory lunch was hosted by the couple for the attendees. 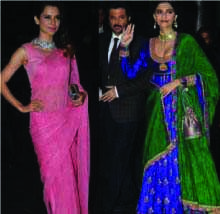 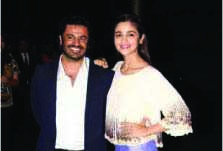 The Pre-wedding festivities, sangeet and haldi ceremonies, were held on July 6, 2015 at The Trident, Gurgaon during which Mira and Shahid tapped their feet to Shahid’s popular hits including “Mauja Hi Mauja,” “Saree Ke Fall Sa,” and many more. Following the wedding, a reception took place at The Oberoi Hotel in Gurgaon and was attended by over 500 guests. However, a grand glitterati wedding reception was organized at the Palladium Hotel in Lower Parel, Mumbai on July 12, 2015 to continue celebrations. It was attended by tinsel town’s A-listed celebs including Amitabh Bachchan, Anil Kapoor, Sonam Kapoor, Ranveer Singh, Kangana Ranaut, Preity Zinta, and Alia Bhatt among others.