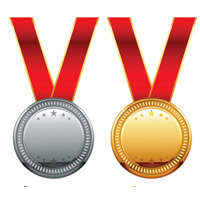 he National Ethnic Coalition of Organizations (NECO), founded in 1984, believes in embracing the diversity of the American people. The organization strives to remind Americans of our diverse backgrounds, cultures, and heritages. Each year, NECO awards the “Ellis Island Medal of Honor” to outstanding individuals who not only contribute to society through personal and professional achievements, but also through a commitment to lead a lifestyle dedicated to community service and to the preservation of cultural interests. The award seeks to acknowledge the historical significance of immigration in the United States by honoring citizens with a variety of ethnic backgrounds for their exceptional qualities while still maintaining the integrity of their heritage.

On May 12, 2007, six Americans of Indian descent were among the 100 Distinguished Recipients of the Ellis Island Medal of Honor. This year’s Indian American recipients exhibit a broad range of interests, fields of profession, and accomplishments, but each demonstrates a dedication to preserving their heritage. The honorees were: Dr. Akshay Desai, Mr. Kirti “Kenny” Desai, Hon. Jacob Eapen, MD, MPH, Dr. Kiran C. Patel, Ms. Smita N. Shah and Mr. Daniel J. Thomas.

Their many achievements and ability to touch individuals has led these distinguished Indians to become honorees at this year’s ceremony at the historic Ellis Island in New York City. They have brought pride to Indians everywhere. They have now joined the honored ranks of past recipients that include six Presidents of the United States presidents and Nobel Prize winners. Their success in their adopted homeland has been an inspiration for all. Desh-Videsh congratulates these honorees for their excellence and dedication to the South Asian culture.

DR. AKSHAY DESAI: F o u n d e r , President and CEO of St. Petersburg- based U n i v e r s a l Health Care Inc., one of the largest Medicare Advantage health plans in the state of Florida. Dr. Desai obtained his medical degree from Government Medical College, India and his Masters Degree in Administrative Medicine while attending the George Washington University in Washington, D.C. Dr. Desai is also deeply connected to his Indian roots and has been on the Board of Trustees of the India Cultural Center, Tampa, Florida since 1998.

MR. KIRTI ‘KENNY’ DESAI: President of the TAK Group of companies, which includes real estate dev e l o p m e n t companies and building residential develo p m e n t projects primarily in New Jersey, the Greater New York, and Philadelphia metropolitan areas. Desai completed his Bachelor’s in Civil Engineering from Baroda, India, before moving to New Jersey for his Master’s, which he was awarded by the Stevens Institute of Technology at Hoboken. His generous personal involvement and donations have resulted in the successful completion of the Mahatma Gandhi Center and the Hindu Temple in Wayne, NJ.

HON. JACOB EAPEN, MD, MPH Pediatrician for Alameda County Health Services. Dr. Eapen was born and educated in India and has devoted his medical expertise to the health problems of undernourished children in developing countries and to poor and disturbed juveniles in the United States. Dr. Eapen is currently serving as a board member of Washington Hospital in Fremont, California and is running for re-elections. He was one of the first Indo-Americans ever to win a general election in Northern California. DR.

KIRAN C. PATEL A board certified cardiologist, he was born in Zambia and educated in England and India. He got his medical degree in his family’s home state of Gujarat, India. With his wife, Dr. Pallavi Patel, he has built a billion dollar physician manage-ment company which provides service to more than 450,000 members, employing more than 1,200 employees and operating in Florida, New York and Connecticut. Today he serves as the Chairman Emeritus for the Patel Foundation for Global Understanding, a non-profit organization that develops and funds a wide variety of programs in health, education and arts & culture.

SMITA SHAH President of SPAAN Technology, Inc. She is the first female of Indian origin to receive this award, and the youngest recipient this year. Shah attended Northwestern University for her undergraduate work where she earned a degree in engineering, and went on to receive her Master’s of Science from the Massachusetts Institute of Technology (MIT). More recently, she has also completed the Advanced Management Program at Oxford University. Smita preserves and celebrates her ancestry as an active member of the Indian community in Chicago, working to bridge the gap between racial and ethnic groups with organizations promoting ethnic diversity as well as those that support the community as a whole.

DANIEL J. THOMAS President and CEO of Periodontal Specialists , Leawood, Kansas, a periodontal group practice which provides non surgical and surgical care to thousands of patients in Kansas and Missouri. Along with his DDS (Doctor of Dental Surgery), Dr. Thomas has also earned Certificates in Periodontics, Implant Dentistry and Conscious Sedation. He went on to earn a Master’s of Science degree in Oral Biology. As the founder and Vice President of the Indian American Republican Council, he is a prominent fundraiser for the Republican Party and provides a platform for Indian Americans to work with the Party and participate actively at local, state and Federal levels nationwide.

Categories: Get to Know, NRI News