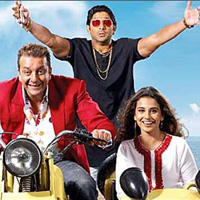 Gandhigiri – What it takes to Remember Gandhi Day 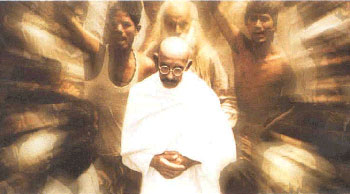 There are many ways by which we Indians know and relate to Mohandass Karamchand Gandhi – Mahatma, Bapu, Gandhiji, the undisputed leader of the Indian Freedom Movement and most prominently, as the Father of the Nation. Thanks to a recently released superhit Hindi movie, “Lage Raho Munnabhai,” the entire nation of a billion came to know that he was also the originator of a movement called “Gandhigiri.”

Sad, but it is a fact that today Gandhiji is remembered by the average Indian only on the 2nd of October, which happens to be a national holiday on account of his birthday and to a lesser extent on 30th of October, his death anniversary. Needless to say that, these days are mostly observed as holiday meant for fun, frolic and outing rather than making any significant remembrance.

The whole scenario changed much interestingly after the release of “Lage Raho Munnabhai” – a movie starring Sanjay Dutt during the second half of this year. The movie took the nation by storm and went on to become one of the greatest hit films of the decade. The central theme of the film was Gandhiji and it brought or rather relived Gandhiji in a manner that the Great Man himself could not have imagined during his lifetime.

Gandhiji and ‘Gandhigiri’ have now become synonymous before the Indians, thanks to the film. ‘Gandhigiri’ is basically a term used in the movie to denote the practice of applying Gandhian thoughts, actions, deeds and teachings in practical life to solve the problems based on today’s circumstances. It is basically an extension of what Gandhiji believed and preached all over his life – truthfulness, patience, owning up responsibility, honesty and in the event of lodging any protest, to do so in the most non-violent way without force or vengeance. Just what Mahatma did during his Non-cooperation movement, Civil Disobedience movement, Dandi March and other such historical events during the days of his struggle for India’s freedom.

Much of the credit for this rejuvenation of Gandhian teachings and thoughts goes to the makers of the film “Lage Raho.” The present generation of Indians almost put the father of the nation to oblivion and confined him only to the pages of textual history books. It is indeed an appreciable task on the part of the producer Vidhu Vinod Chopra and Director Rajkumar Hirani to have thought of such a script and bring it to life. Otherwise, present day India could not have easily realized the relevance and importance of Mahatma’s words and thoughts, even in today’s world – especially in a country like India which is hit by violence, corruption, nepotism and distrust.

To summarize the story, the theme of the movie revolves around an underworld don – Munnabhai, extraordinarily enacted by Sanjay Dutt, and how he transforms into a responsible and caring citizen after coming across the views of Gandhiji in an effort to woo his girlfriend. The movie showed metaphysical interactions between Munnabhai and Gandhiji, and in each case, the latter persuades and manages to pull Munnabhai out of every crisis through timely and appropriate advices – termed as Gandhigiri. 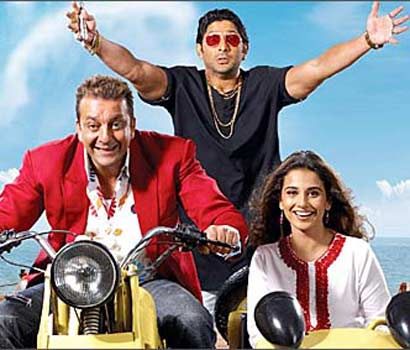 Eventually, Munnabhai learns more and more about Gandhian ways – his idea of non-violence or ‘Ahimsa’; not to hurt anybody even in retaliation but to allow the aggrieved person to vent their anger and frustration on oneself; treading the path of truthfulness ; standing up against crime, dishonesty, corruption, favouritism, superstition and such other vices that cripple men and the society – and ultimately applies them to help the common people overcome their problems and conflicts of the day to day life.

Gandhigiri is, in other words, the way to obtain victory for all that is good over the evils and darkness present within ourselves, our neighbourhood, our society and our country – in the most peaceful and non-violent way, without hurting anybody – but patiently making the culprits understand their wrongdoing. In the film, Munnabhai does wonders through his own interpretation of ‘Gandhigiri.’ He manages to stall the greedy moves of a merciless builder who wanted to demolish an old age home by first making the residents of the home sit on the footpath opposite to the house of the builder day and night and offer a smile, whenever their eyes met with the latter. When this trick did not work, Munnabhai spread the word all over that greed is a disease, and the builder is suffering from it. Everyone must send ‘Get well’ messages to him to ensure that he comes out of the ailment soon and fast. Subsequently, Munnabhai’s non-violent ways of protest and patience paid off and his objectives were achieved. Similarly, his persuasion towards a suicidal youth to disclose his fatal gambling habits before his unsuspecting father, and eventually saving his life was a clear manifestation of the strength of truthfulness and honesty – virtues that Gandhi always highlighted. Munnabhai continued to be the messiah and went on solving problems and conflicts of the common man. Each time he takes his cue from the words and teachings of Gandhiji – “Gandhigiri” in his own words. He eventually changed the bad habits of an ill-mannered man by reciprocating good behaviour and displaying utmost patience; taught a corrupt Government employee a lesson for having asked for a bribe from an old aged pensioner – having advised the latter to strip down to his last piece of clothing as an offering; and finally saved a marriage between a consenting couple by proving a point to the superstitious father of the groom.

All was fine up to the point where the incidents and applications of Gandhigiri were shown in the film. What became an unprecedented phenomenon was the effect Gandhigiri began to have on the common man and the society. It seemed as if the nation had abruptly woken up to realize that there was a man called Gandhi, and his views and thoughts are pertinent and are still relevant. The movie seemed to pull out the almost-forgotten hero of Indian independence from a deep slumber and made him the ‘coolest thing’ before the present generation. The mantra of Gandhigiri is spreading among Generation-X and Generation-Y of today faster than anyone could ever imagine.

News about the real-life application of Gandhigiri, courtesy of Munnabhai, came pouring in from all corners of the country. “Gandhigiri Club” and “Munnabhai Fan Club” began to pop up like mushrooms where the ‘duty’ of the members was to practice Gandhigiri in the daily life and spread the message of Gandhian views.

In Pune, erring traffic violators were caught by the public and given a rose. They were told “Thank you for committing this offense, but please don’t do this next time!” Petty thieves were caught and given food and money, then let off after being politely asked to be good. Traders and businessmen, who wanted to lodge a protest against the Government directives, restrained themselves from violent agitations and resorted to peaceful marches and sit-down strikes. It is even heard that in Mumbai, when a corporate official asked for a bribe for granting some permission, the applicant replicated the act as shown in “Lage Raho” and started stripping to offer his last belongings to the corrupt official.

Such is the rage of Gandhigiri that Vardhman Mahaveer Open University of Kotah, Rajasthan has designed a 6-month certificate course on Gandhigiri. The course content will involve Gandhiji’s life, philosophy and ideology – Non-cooperation, Fast, Sit-down strikes, etc – in other words, all then tools of Non-violent agitation. It will also teach how effective the practice of Ahimsa or non-violence is in day to day life.

It is said that in India, cricket and movies are the biggest religions. Probably so, but it took a movie to remind us all of what we have possessed for decades and never vested proper attention. Though we have had such a great man and his ideology at our disposal, we ignored and neglected him for some time. In today’s perspective, proper application of Gandhiji’s teachings and thoughts can indeed curb down the atmosphere of violence, hatred, vengeance, impatience and distrust that is gradually engulfing us day by day. If we sincerely follow Gandhiji’s path and try to change ourselves, we can certainly make a difference to the society. By containing our instincts and toning down our lust, anger, greed, revengeful attitude and displaying more of patience, love, honesty and trust – we can not only bring life to Gandhiji’s ideologies but also make our country a better place to live in.

It is worthwhile to mention at this juncture, a current experience. A friend of mine recently started working for an organization after much uproar. Within a month of joining, she got a far better offer from a highly reputed company. Finding ways and excuses of how to seek release from the present job, she discussed various options with me. Later, it was decided that it is better to apply the Gandhian way of speaking the truth and owning up responsibility. She followed the decision to the core and surprisingly, her current employers open-heartedly congratulated her for the break and immediately released her, even ignoring the statutory company rules. The first SMS I received from her said “Gandhigiri has worked!”

Gandhiji had taught us that violence must not be reciprocated. He asked all to refrain from taking an eye for eye, blood for blood. He always maintained that Ahimsa (non-violence) and truth are the most powerful weapons. It is only when we begin to believe in his theories and start practicing Gandhigiri will we be able to blunt the million vices that surround us. The road ahead is not smooth, but quite difficult. The entire mindset has to change, there is doubt about actual fulfillment , but then … ” Lage Raho Gandhigiri!”

Gandhigiri – What it takes to Remember Gandhi Dayr

Categories: Bollywood News, Get to Know