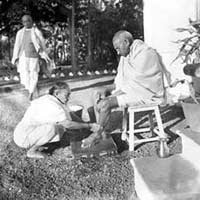 As promised earlier this year, in honor of the 150th birth anniversary of our beloved Father of Nation and my mentor, Mahatma Gandhi ji, we will feature one article about him in every issue. Given this month is the Education issue, it is only fitting we discuss Gandhi’s greatest guru and teacher, his wife Kasturba. 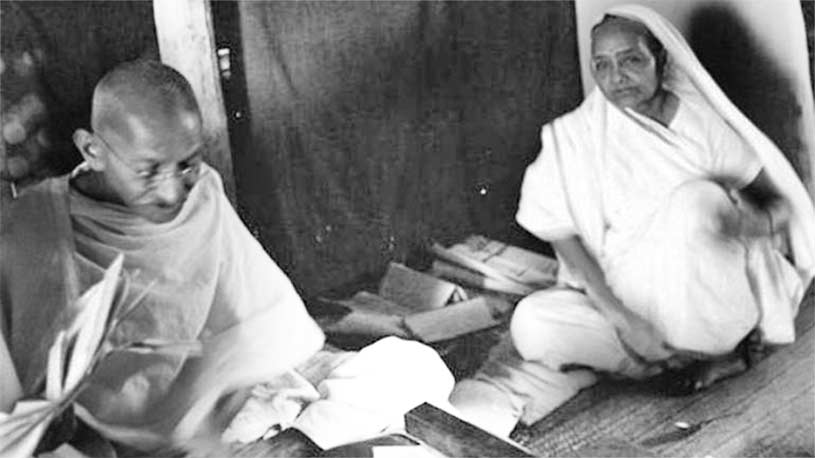 Marriages promise happiness and a rich journey that can be both harmonious and stormy. The marriage of Mohandas K. “Mahatma” Gandhi and Kasturba Gandhi lasted over 62 years, and the couple showed both remarkable common vision as well as an epic battle of wills in which Mahatma conceded she was his master, although it was their partnership that provided a solid grounding for the couple’s shared commitment to public service through nonviolent struggle. Kasturba often fades into the background of an imbalanced historical record. It is difficult to get her point of view as one needs to filter it largely through her husband’s writings. Gandhi left behind ninety-eight volumes of writings in his collected works. Kasturba was illiterate. Nevertheless, she left an important impact and played a central role in the nonviolent campaigns of Gandhi. One can find her voice and her willpower, which Gandhi encountered head-on when he tried to bend her to his own will as a young couple. British viceroys later found Gandhi to be frustratingly stubborn, but Gandhi learned these techniques when he met his match, confronting his own guru in nonviolence: his wife Kasturba.

The young Gandhi was very different from the elderly freedom fighter with whom the world became familiar later. As a teenager, Gandhi was an Anglophile, a sharp dresser, jealous, and passionate. Married at age thirteen, he was extremely suspicious and possessive of his wife Kasturba. Although she was loyal, he set down strict guidelines, as he related in his Autobiography: “she could not go anywhere without my permission. This sowed the seeds of a bitter quarrel between us” (9). Rather than submit, however, Kasturba rose up to the challenge by invoking her own volition. Exasperated, Gandhi wrote, “She made it a point to go out whenever and wherever she liked. More restraint on my part resulted in more liberty being taken by her and in my getting more and more cross” (9). A half a century later, even Gandhi himself admitted, 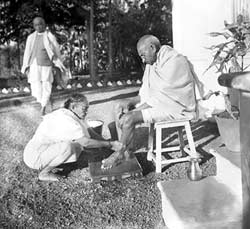 “I used to be a tyrant at home…I used to let loose my anger at Kasturba. But she bore it all meekly and uncomplainingly…her unresisting meekness opened my eyes and slowly it began to dawn upon me that I had no such prescriptive right over her. If I wanted her obedience, I had first to persuade her by patient argument. She thus became my teacher in non-violence…I literally used to make life a hell for her. Every other day I would… prescribe what dress she was wearing…She was not educated…[yet] Her guileless simplicity conquered me.” (Rajmohan Gandhi, Gandhi, 397-8; Gandhi CW Vol. 74, p. 147 [statement by Gandhi Oct 23, 1938]).

Gandhi made the mistake of thinking he could improve his wife by educating her, and once again they wrestled with conflicting goals and willpower. Gandhi wrote, “Kasturba was illiterate. I was very anxious to teach her, but…the teaching had to be done against her will” (Gandhi Autobiography 10). As his grandson Arun Gandhi writes, “He was going to teach his illiterate wife to read and write…keeping her awake late into the night outlining his course of instruction starting with the alphabet, and expecting her enthusiastic acceptance of the project. Instead, she seemed wary, unresponsive” (Arun and Sunanda Gandhi, The Forgotten Woman, 23). Instead of staying up to study, the couple usually ended up going to bed. Once again Kasturba proved the master of the Mahatma, who was unable to overcome the determination of his wife. 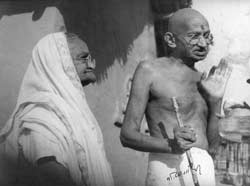 Despite years apart, Gandhi thought of himself as a good father. Gandhi spent years away from his family, three years pursuing legal studies in London and several more years in South Africa. Once his family joined him in South Africa, Gandhi did spend time as a father directly caring for his children. He had a guidebook called Advice to a Mother, and he “nursed both my children according to the instructions given in the book.” The Gandhis did employ a nurse as well, but she helped Kastur, as she was “not for taking care of the babies, which I did myself.” He also delivered his last child, Devadas, himself, as the doctor was unavailable (Gandhi,Autobiography, Part III Chap VI, p. 178). Kasturba does not have a voice in the historical record, but it appears Gandhi was compensating here for not being around for years at a time, so he took pains here to show that he himself was contributing. His taking advice from a book rather than Kasturba herself, however is a sign of his continuing determination to show he knew best. She had already had plenty of experience raising four sons, so could have been a better source of information than the book.

Another point of contention was a divide between loyalty to family and commitment to public service. Although he refused to receive payment for his organizing work, the Indian community in South Africa nevertheless gave gifts to Gandhi and wife Kasturba as they were preparing to return to India. Gandhi had been insisting on simplifying their lifestyle, and even their children agreed to return the gifts. But Kasturba resisted, wanting to have gifts to give her own relatives and insurance in case of emergency. She fought back against Gandhi’s austerity, arguing he was trying to impoverish their children, and asked him, “what right have you to my necklace?” This argument Gandhi was able to win, eventually persuading her to relent. “I was determined to return the ornaments. I somehow succeeded in extorting a consent from her” (Gandhi,Autobiography, 193-194). 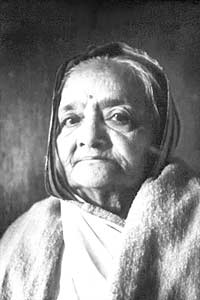 Kasturba played a crucial role as Gandhi’s partner. She actively joined Gandhi in what became their political struggles, leading Indian women in South Africa into the nonviolent fight in 1913, and into jail (Gandhi/Fischer, Essential Gandhi, 93). A vital element in Gandhi’s nonviolent movement was the involvement of a wide population in the struggle, with women playing a crucial part of the struggle. After having four sons together, in their mid-30s, Gandhi unilaterally decided to take a vow of celibacy. “After full discussion and mature deliberation I took the vow in 1906. I had not shared my thoughts with my wife until then, but only consulted her at the time of taking the vow. She had no objection” (Gandhi, Autobiography 182). 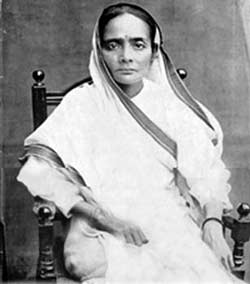 Gandhi, Mahatma and Louis Fischer, ed., Preface by Eknath Easwaran. The Essential Gandhi: An Anthology of His Writings on His Life, Work, and Ideas. New York: Vintage, 2002.

Gandhi, Rajmohan. Gandhi: The Man, the People, and the Empire. Los Angeles and Berkeley: University of California Press, 2008.