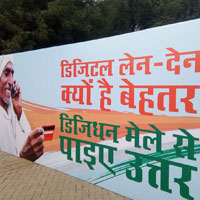 As part of the nationwide 100-day special campaign to promote digital and cashless transactions, the third ‘DigiDhan Mela’ was organised in Goa’s capital Panaji on Wednesday.

He added that country is moving towards less cash economy, as digital transactions have registered a remarkable spike.

On this occasion, Goa Chief Minister Laxmikant Parsekar said that people in Goa have shifted in a big way to digital payments.

Earlier, ‘DigiDhan Mela’ was organised in Gurugram in Haryana as well as in Ludhiana in Punjab to raise awareness among people to go for digital and cashless transactions. As many as 100 such fetes would be organized throughout the country up to April 14, 2017.

The scheme envisages offering cash rewards to consumers and merchants who are doing digital transactions. As many as 15,000 winners would get cash back prizes of Rs1000 each every day. Likewise, under Digi Dhan Vyapar Yojana, the merchants across the country doing business using POS machines would be eligible to win Rs 50,000 per week. Mega prizes for both these schemes for digital transactions between November 8 to April 13, 2017, would be announced on April 14, 2017.