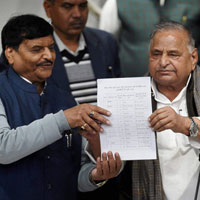 SP supremo Mulayam Singh Yadav has released a list of 325 candidates for UP assembly polls.

While Ministers loyal to Akhilesh have been denied tickets… It has been given to Akhilesh baiters Gayatri Prajapati, Atiq Ahmed, Sib-gatullah Ansari and Narad Rai.

The crisis in ruling Samajawadi Party in Uttar Pradesh may further deepen in coming days.

The list of candidates announced by Mulayam includes 176 sitting MLAs while 149 new faces have got the tickets for upcoming polls in the state.

Names of candidates for rest of the 78 seats would be announced in next four-five days.

In the list announced, Mulayam Singh has ignored Akhilesh’s objections to certain names.

The list finds no mention on names of several pro-Akhilesh ministers and MLAs, including Ram Govind Chaudhary, Pawan Pandey and Arvind Singh Gope.

Atiq Ahmed who faces over 40 criminal cases including that of murder. According to sources, Akhilesh had sent a list of candidates to Mulayam Singh which excluded the names of Atiq Ahmad, Sigbatullah Ansari, Gayatri Prasad Prajapati and sacked minister Narad Rai.

However, giving a snub to his Chief Minister and his son Mulayam SIngh included the names of all these leaders.

Samajwadi Party Chief Mulayam Singh Yadav claimed that there is no rift within the party.

Ending speculation of a tie-up with Congress and RLD, he also ruled out any alliance with any political party. He made it clear that his party would contest elections on all 403 seats.

Notably, Akhilesh had publicly made it clear that he was not averse to an alliance with Congress. By all indications, the crisis within Samajwadi Party, that has already spilled on to the public realm in past, is not yet over.

— However, Mulayam Singh’s list includes names of all these leaders.

Righting the Ship After a Financial Setback