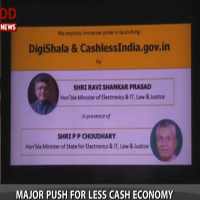 Continuing on the path of eradicating black money and corruption, the government is pushing forward its agenda of a less cash economy through various initiatives.

The latest in this regard is the ‘Digidhan’ campaign begun which kicked off on Friday.

The aim of the campaign is to spread awareness about digital transactions.

Part of this initiative is an exclusive channel called digishala TV.

This free to air channel will be airing shows targeted at the rural and suburban population to inform them of various aspects of going digital like e-wallet, UPI, USSD, AADHAAR AND USAGE OF cards through talk shows and demonstrations.

The service will create the groundwork for the inclusion of India’s rural and marginalised sections into the digital platform.

The services will initially be available in Hindi and English and later in local languages as well.

Within a month, Digital wallet usage has increased from 17 lakhs to 63 lakhs per day.

Transaction through Rupay has increased from 3.85 lakhs to 16 lakhs per day.

UPI transactions have increased to 3721 from 48238 daily. And usage of swipe machines has also increased from 50.2 lakhs in a month to 98.1 crores.

Throughout the country digital transactions have increased manifold.

In Chhattisgarh’s Raipur for example, local traders and businessman are all praise for this new means of doing business.

On Thursday too the government had announced 11 new benefits of digital transactions among these are a 0.75 percent deduction on petrol and diesel prices and a 10 lakh rupee accident insurance on booking rail tickets if cards are used in the transaction.

People have welcomed the move.

All in all, as the government pushes forward its goal of a less cash economy, people too are embracing the move and making it a success.