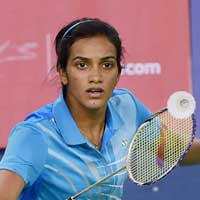 Great expectations as Sindhu returns at Denmark Open after Rio

The sixth-seeded Indian will open her campaign against China’s He Bingjiao on Wednesday.

Sindhu has been clubbed in the second half of the draw where she might face the likes of second seed Ratchanok Intanon of Thailand, Korean fourth seed Sung Ji Hyun and the tricky Chinese Taipei girl Tai Tzu Ying, seeded fifth.