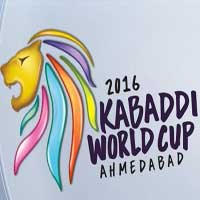 India to face England in the Kabaddi World Cup match in Ahmedabad today. In another match USA to take over Kenya in the third edition of the World Cup.

At the ongoing Kabaddi World Cup in Ahmedabad where 12 counties are taking part, England have as many as 6 players who are part of the UK RSS group.

In England, RSS goes by the name of ‘Hindu Swayamsevak Sangh’ and the volunteer organisation put a picture of the players on social media, congratulating them on their selection into the squad.

England lost to Bangladesh convincingly in their opening clash of the competition but they have now set their eyes firmly on the blockbuster clash against the mighty hosts.

“6 of us are part of the HSS back in England and we started playing kabaddi there itself. We are proud of being associated with ‘Rashtriya Swayamsevak Sangh’ but as we are born and brought up in England, we will give out all for our country against India”, said captain Someshwar Kalia.