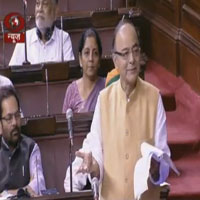 Government listed the GST Bill for consideration and passage in Rajya Sabha’s agenda for next week.

Parliamentary Affairs Mukhtar Abbas Naqvi said the Constitution 122nd Amendment Bill, 2014 will be taken up for consideration and passage, on August 1.

The Cabinet had cleared changes in the legislation, dropping the one per cent manufacturing tax and providing guarantee to compensate states for any revenue loss, in the first five years of GST’s rollout.

On Wednesday, Cabinet had cleared key changes in the legislation to address the concerns of the states and to accommodate one of the three demands made by Cong. Talks are on over the other two demands. It is hoped that this will pave the way for passage of the game-changer bill.

Meanwhile, Finance Minister Arun Jaitley has stepped up the outreach efforts and has been holding meetings with senior Congress leaders and leaders from other parties as well. Government is hopeful that the bill will be passed in both houses on next week.

The Union Cabinet earlier this week cleared some changes in the Bill, including dropping of the one per cent manufacturing tax and guaranteeing compensation for any revenue losses states may experience in the first five years of rolling out the proposed indirect tax scheme.

Lok Sabha has already cleared the bill but government found itself in a tight spot owing to the numbers in the upper house. It does not have the majority needed to pass the bill. In the recent Rajya Sabha elections number game has changed in the house making it easier for the government.

Prime minister Narendra Modi and other senior NDA leaders have shown keen interest in getting the GST bill passed with a broad consensus. The new bill will usher in an era of tax reforms and transparency across the nation once it is implemented from 1 st of April 2017.