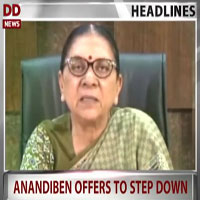 Gujarat CM Anandiben Patel has offered to resign as Chief Minister and asked the BJP high command to start the process of selecting a new Chief Minister.

In a letter to the party high command, she stated that she desires to step down as Chief Minister when she turns 75 on the 21st November.

She posted the letter on her Facebook page and submitted her resignation to party president Amit Shah and State BJP chief Vijay Rupani.

Amit Shah has said the BJP parliamentary board will take the final decision on the issue.