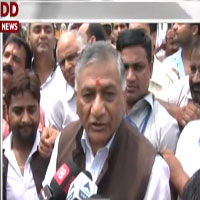 Minister of State for External Affairs VK Singh will visit Saudi Arabia to oversee the evacuation process of the laid-off Indian workers in the country.

EAM Sushma Swaraj on Monday assured Parliament that around the 10,000 Indians stranded in Saudi Arabia will be evacuated and food has been distributed to all of them.

In a statement in both Houses of Parliament, Sushma Swaraj also informed Parliament that 5 camps have been organized in Saudi Arabia for the stranded Indians.

The Saudi government has been urged to grant the stranded workers emergency exit visas at the earliest.

The Indian Embassy in Riyadh and the consulate in Jeddah has organized food for the workers.

Centre has assured the nation in Parliament that the nearly 10,000 workers stuck in Saudi Arabia without jobs will be brought back safe and sound.

Arrangements have been made by the Indian embassy there to ensure none go hungry.

Responding to concerns raised by members in both houses,Sushma Swaraj said that V K Singh will head to Riyadh soon to put processes in place so that no Indian worker is left in distress in Saudi Arabia.

Members in both houses had raised the issue earlier expressing concern over the fate of Indian workers.

The Minister also informed Parliament that 5 camps have been organised in Saudi Arabia for the stranded Indians.

The Saudi govt has been urged to grant the stranded workers emergency exit visas at the earliest without NOC from them employers as many of them have left the country shutting down factories.

The Indian Embassy in Riyadh and the consulate in Jeddah has organised food for the workers and MoS External Affairs M J Akbar has been in touch with Saudi authorities to sort out the issues related to the exit visa and pending wages.