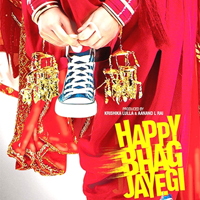 From the house of entertainers likeRaanjhanaa and Tanu Weds Manu, we have another comedy hitting the silver screen soon! Happy Bhag Jayegi, starring Abhay Deol, Diana Penty, Momal Sheikh, Ali Fazal and Jimmy Sheirgill, is all set to run in theatres this August.

The film is a comedy of errors, and from its first look fans have been intrigued about its story. What we hear is that the film revolves around a young gutsy bride who runs away from her wedding and crosses the border, and what follows are a series of hilarious episodes that make this movie a must watch!

After a long hiatus, Diana Penty is back as the independent, sharp-tongued bride to be Harpreet Kaur aka Happy and starring opposite her is Abhay who plays the role of Bilal Ahmed, a reluctant political heir with a closet passion for cricket.

Ali Fazal’s Guddu is a lover boy and a musician, while Jimmy essays the role of a municipal corporate, Bagga. Being a comic entertainer, the makers are calling this movie a run-com instead of a rom-com!

The poster of the movie was launched in an innovative way amidst much fanfare, following which we are waiting to see the buzz the trailer of the movie is set to create. The trailer will be out today on Eros Now.

Producer Krishika Lulla of Eros International says, “Happy Bhag Jayegi is a fun, quirky entertainer that promises to have mass appeal with oodles of laughter. It boasts of a unique script, superlative performances and music that will want you to get up and dance.”

Filmmaker Aanand L Rai, of Colour Yellow Productions that is also producing the film, added, “I believe the audience always likes to see something unusual and different on screen. Besides the humorous narrative, the movie’s unique characters will catch everyone’s attention.”

Director Mudassar Aziz says, “It’s an ensemble comedy that arises from an accidental plot. I have always loved such kind of movies.This film marks the return of usage of various languages as an instrument for comedy.”

Happy Bhag Jayegi, presented by Eros International and produced by Colour Yellow Productions, is slated to release on August 19.