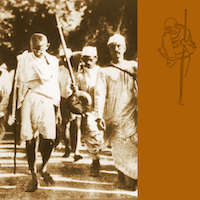 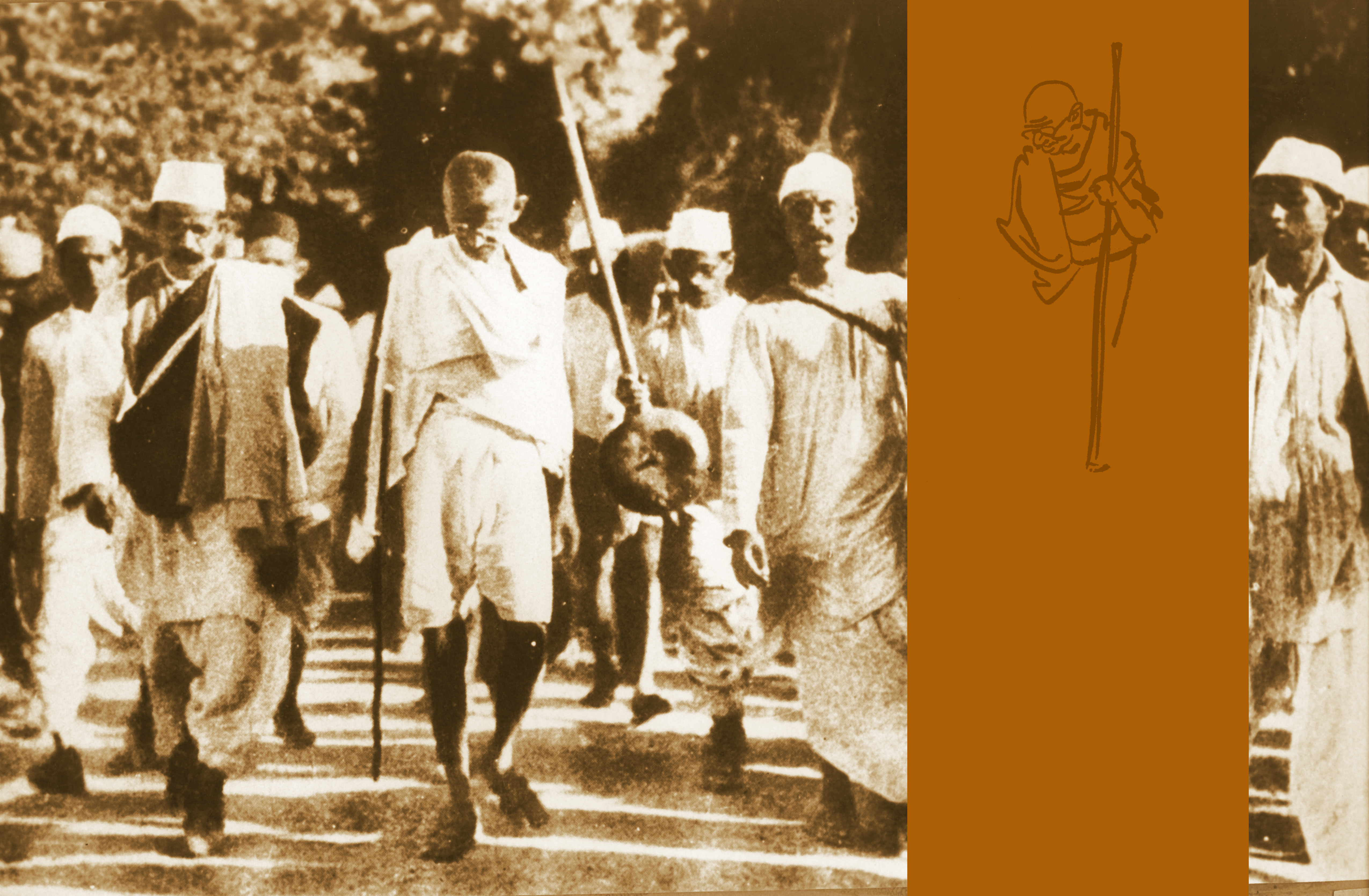 A 61 year old man, 91 years ago, walked 241 miles in 25 days, which included three rest days, at a pace of nearly 11 miles per day. That man is not other than our own Mahatma Gandhi ji and that walk was called the Salt March, also known as the Salt Satyagraha, Dandi March and the Dandi Satyagraha.

Last month we celebrated the 91st anniversary of that Historic Dandi March that shook the entire British Raj. Gandhi ji began his Dandi March on March 12, 1930, from Sabarmati Ashram, Ahmedabad, Gujarat and arrived in Dandi, Gujarat, on April 5, 1930, and broke the oppressive British Salt Law.

Gandhi ji began the Dandi March with 78 of his trusted volunteers. Growing numbers of Indians joined them along the way. When Gandhi broke British Raj salt laws at 6:30 am on April 6, 1930, it sparked large scale acts of civil disobedience against the salt laws by millions of Indians. 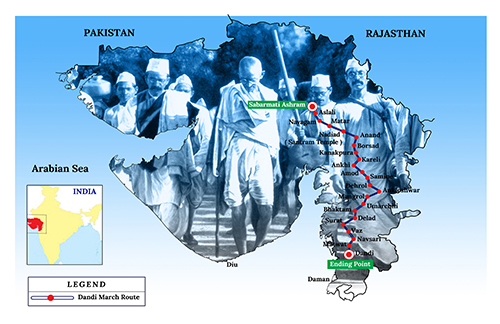 On April 6, 1930 morning, after a prayer, Gandhi raised a lump of salty mud and declared, “With this, I am shaking the foundations of the British Empire.”  Fifteen grams of salt were distilled from the fistfull of saline mud Bapu picked at Dandi beach. This act to produce illegal salt was repeated by thousands and thousands of men and women all over India. This led to the arrest of an estimated 100,000 Indian men and women who participated for the first time in mass public demonstrations. It shook the foundations of the great British empire. Every grain counted, so did every step, every mile, every day on the march.

After making the salt by evaporation at Dandi, Gandhi continued southward along the coast, making salt and addressing meetings on the way. Around midnight on May 4, 1930, as Gandhi was sleeping, the District Magistrate of Surat drove up with two Indian officers and thirty heavily armed constables. He was arrested and held without trial near Poona.

Following Gandhi’s arrest and imprisonment, the nonviolent demonstration continued under the leadership of Sarojini Naidu, a woman poet and freedom fighter, who warned the satyagrahis, “You must not use any violence under any circumstances. You will be beaten, but you must not resist: you must not even raise a hand to ward off blows.”

Not one of the marchers even raised an arm to fend off the blows. They went down like ten-pins. From where I stood I heard the sickening whacks of the clubs on unprotected skulls. The waiting crowd of watchers groaned and sucked in their breaths in sympathetic pain at every blow. Those struck down fell sprawling, unconscious or writhing in pain with fractured skulls or broken shoulders. In two or three minutes the ground was quilted with bodies. Great patches of blood widened on their white clothes. The survivors without breaking ranks silently and doggedly marched on until struck down … Finally the police became enraged by the non-resistance … They commenced savagely kicking the seated men in the abdomen and testicles. The injured men writhed and squealed in agony, which seemed to inflame the fury of the police … The police then began dragging the sitting men by the arms or feet, sometimes for a hundred yards, and throwing them into ditches.

Miller’s reporting in international news media moved many around the world to sympathize with the Indian cause. Gandhi was finally released from prison and the Salt Satyagraha ended on March 4, 1931, with the signing of the Gandhi-Irwin pact and an invitation for Gandhi to attend Round Table talks in London to discuss the possibility of Indian independence. 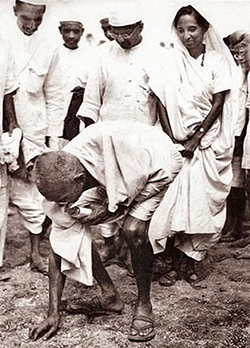 The Eve of the Historic Dandi March

On March 11, 1930, the eve of the historic Dandi March, more than 10,000 Gandhi followers were gathered at the evening prayer held at Sabarmati Ashram, Ahmedabad. At the end, Gandhiji delivered a memorable speech on the eve of his historic march:

I have already told you yesterday what I had to say. Today I shall confine myself to what you should do after my companions and I are arrested. The programme of the march to Jalalpur must be fulfilled as originally settled. The enlistment of the volunteers for this purpose should be confined to Gujarat only. From what I have been and heard during the last fortnight, I am inclined to believe that the stream of civil resisters will flow unbroken.

But let there be not a semblance of breach of peace even after all of us have been arrested. We have resolved to utilize all our resources in the pursuit of an exclusively nonviolent struggle. Let no one commit a wrong in anger. This is my hope and prayer. I wish these words of mine reached every nook and corner of the land. My task shall be done if I perish and so do my comrades. It will then be for the Working Committee of the Congress to show you the way and it will be up to you to follow its lead. So long as I have reached Jalalpur, let nothing be done in contravention to the authority vested

in me by the Congress. But once I am arrested, the whole responsibility shifts to the Congress. No one who believes in non-violence, as a creed, needs, therefore, sit still. My compact with the Congress ends as soon as I am arrested. In that case volunteers. Wherever possible, civil disobedience of salt should be started. These laws can be violated in three ways. It is an offence to manufacture salt wherever there are facilities for doing so. The possession and sale of contraband salt, which includes natural salt or salt earth, is also an offence. The purchasers of such salt will be equally guilty. To carry away the natural salt deposits on the seashore is likewise violation of law. So is the hawking of such salt. In short, you may  choose any one or all of these devices to break the salt monopoly.

We are, however, not to be content with this alone. There is no ban by the Congress and wherever the local workers have self-confidence other suitable measures may be adopted. I stress only one condition, namely, let our pledge of truth and nonviolence as the only means for the attainment of Swaraj be faithfully kept. For the rest, everyone has a free hand. But, then does not give a license to all and sundry to carry on their own responsibility. Wherever there are local leaders, their orders should be obeyed by the people. Where there are no leaders and only a handful of men have faith in the programme, they may do what they can, if they have enough self-confidence. They have a right, nay it is their duty, to do so. The history of the is full of instances of men who rose to leadership, by sheer force of self-confidence, bravery and tenacity. We too, if we sincerely aspire to Swaraj and are impatient to attain it, should have similar self-confidence. Our ranks will swell and our hearts strengthen, as the number of our arrests by the Government increases. 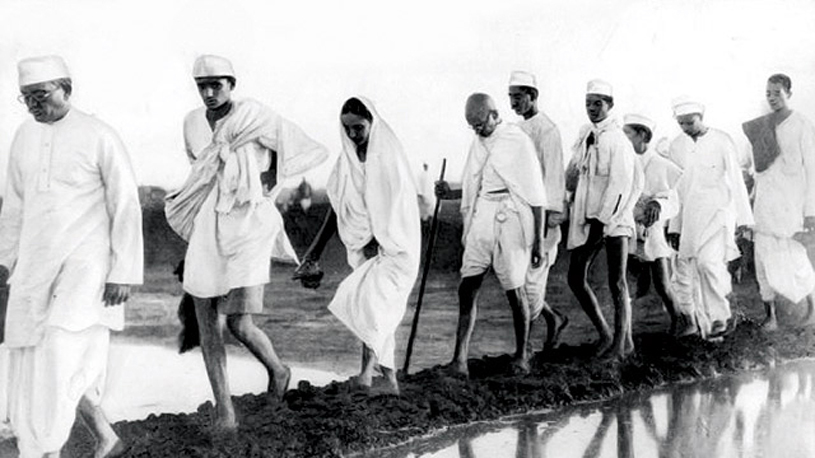 Much can be done in many other ways besides these. The Liquor and foreign cloth shops can be picketed. We can refuse to pay taxes if we have the requisite strength. The lawyers can give up practice. The public can boycott the law courts by refraining from litigation. Government servants can resign their posts. In the midst of the despair reigning all round people quake with fear of losing employment. Such men are unfit for Swaraj. But why this despair? The number of Government servants in the country does not exceed a few hundred thousands. What about the rest? Where are they to go? Even free India will not be able to accommodate a greater number of public servants. A Collector then will not need the number of servants, he has got today. He will be his own servant. Our starving millions can by no means afford this enormous expenditure. If, therefore, we are sensible enough, let us bid good-bye to Government employment, no matter if it is the post of a judge or a peon. Let all who are cooperating with the Government in one way or another, be it by paying taxes, keeping titles, or sending children to official schools, etc. withdraw their co-operation in all or as many watts as possible. Then there are women who can stand shoulder to shoulder with men in this struggle.

You may take it as my will. It was the message that I desired to impart to you before starting on the march or for the jail. I wish that there should be no suspension or abandonment of the war that commences tomorrow morning or earlier, if I am arrested before that time. I shall eagerly await the news that ten batches are ready as soon as my batch is arrested. I believe there are men in India to complete the work begun by me. I have faith in the righteousness of our cause and the purity of our weapons. And where the means are clean, there God is undoubtedly present with His blessings. And where these three combine, their defeat is an impossibility. A Satyagrahi, whether free or incarcerated, is ever victorious. He is vanquished only, when he forsakes truth and nonviolence and turns a deaf ear to the inner voice. If, therefore, there is such a thing as defeat for even a Satyagrahi, he alone is the cause of it. God bless you all and keep off all obstacles from the path in the struggle that begins tomorrow.

Post Views: 901
Women’s History Month: 15 Women Who Shaped the Indian Constitution
How You May Benefit from Another Government Stimulus Plan