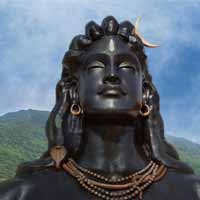 This will be the largest face on the planet, recognizing the first yogi’s unparalleled contribution to humanity. This iconic face symbolizes liberation, representing the 112 ways in which one can attain to one’s ultimate through the science of yoga.

As a tribute to Adiyogi, the Hon’ble Prime Minister lighted the sacred fire to commence the Maha Yoga Yagna across the world: 1 million people took an oath to teach a simple form of yoga to at least 100 people each in the coming year, and touch at least 100 million people before the next Mahashivaratri.

The Ministry of Tourism, Govt. of India has included the Consecration of this glorious face in its official Incredible India campaign as a destination.

The unveiling of Adiyogi was part of the largest Mahashivaratri celebrations in the country which was telecast live, simultaneously in 7 languages to millions of  people through over 23 satellite television channels and several online platforms. As there is a natural upsurge of energies in the human system on this night due to the planetary positions, there is immense benefit in keeping one’s spine erect.

At 11o latitude in India, because of the tilt and precision in the spin axis of the Earth, the centrifugal force is nearly vertical, and Isha Yoga Center by virtue of being on this latitude becomes an ideal place to be on the night of Mahashivaratri

The festivities of Mahashivaratri began at 6 PM and concluded at 6 AM, the next morning. The nightlong celebrations included the powerful midnight meditation & discourse by Sadhguru, cultural performances by Kailash Kher, Rajasthan Roots with Kutle Khan, Sounds of Isha (Isha’s home grown, anomalous group of musicians) and dance troop Nritarutya.

Describing the significance of Adiyogi, Sadhguru said, “It is essential that the next generations of people on this planet are seekers, not believers.  As philosophies, ideology, belief systems that don’t stand the test of logic and the scientific verification will naturally collapse in coming decades, you will see the longing for liberation will rise. When that longing rises, Adiyogi and the science of Yoga will become very important.”

“In Tamil Nadu, Amavasya is considered the most important day in the month. We will leave the first offering to Adiyogi to the local people as a way of honoring the common people of the land, as an expression of their love and devotion.” –Sadhguru

“For the first time in the history of humanity, Adiyogi introduced the idea that the simple laws of nature are not permanent restrictions. If one is willing to strive, one can go beyond all limitations and attain to liberation, moving humanity from assumed stagnation to conscious evolution.” – Sadhguru

Post Views: 1,481
First time a record 27 US Congressman travelling to India
The Marriage of Science and Spirituality