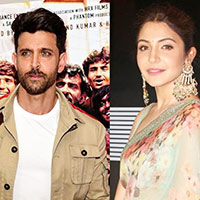 The Remake of cult classic Satte Pe Satta has been in headlines ever since Farah Khan and Rohit Shetty announced their collaboration for the project. The original action-comedy starred Amitabh Bachchan, Hema Malini, Amjad Khan, Ranjeeta Kaur, Sachin, Shakti Kapoor, among others. The film was released in 1982 and was directed by Raj N. Sippy.

We have heard reports that Hrithik Roshan signed as the main lead reprising the role of Amitabh Bachchan. Latest news revealed that Anushka Sharma was roped in to play Hema Malini’s role. This is the first film that the actress has signed since her 2018 debacle Zero, co-starring Shah Rukh Khan and Katrina Kaif. The remake is tentatively titled Seven.

Talking about the project, in an interview, Farah Khan has said, “Rohit is producing the film and I am directing it. Unless we come together and make a proper official announcement, everything is speculation. Hopefully, we will make the announcement by Diwali. I am waiting for Rohit, because he is quite occupied these days, finishing the last leg of the shooting of his film Sooryavanshi.” This will be Rohit and Farah first-ever collaboration.