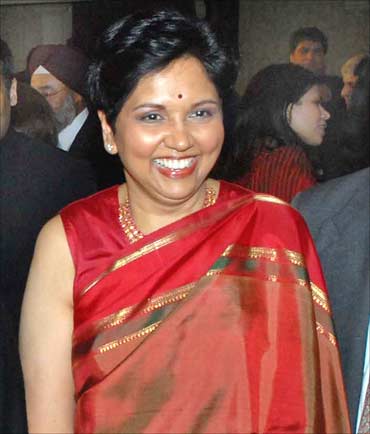 The rise of Indra Nooyi from her teen days at Chennai, India through the struggling days at Yale University to her imminent numero uno position at PepsiCo is indeed a saga that may make even the staunchest follower of miracle jump in disbelief.

Born on 28 October, 1955 at Madras, Nooyi had her schooling and graduation done at the city itself. She went on to obtain her MBA degree from the Indian Institute of Management, Calcutta in 1976

The rise of Indra Nooyi from her teen days at Chennai, India through the struggling days at Yale University to her imminent numero uno position at PepsiCo is indeed a saga that may make even the staunchest follower of miracle jump in disbelief. But, it was sheer hard work, perseverance and utmost belief in her own abilities that brought Nooyi where she is today.

1955 at Madras, Nooyi had her schooling and graduation done at the city itself. She went on to obtain her MBA degree from the Indian Institute of Management, Calcutta in 1976 and worked for two years in India – first with Johnson & Johnson and then with Mettur Beardsell Ltd – a textile firm, as product manager. Thereafter she flew to the United States and attended the Yale Graduate School of Management, from where she earned her Master’s degree in Public and Private Management in 1980.

Post-Yale, Nooyi started her professional career in the US with Boston Consulting Group, where for the next six years she was looking after the international corporate strategy projects and her clients ranged from textiles and consumer goods companies to retailers and specialty chemicals producers. In 1986, she joined Motorola as the vice-president and director of Corporate Strategy & Planning. Four years later, Nooyi shifted to Asea Brown Boveri (ABB) in 1990 and spent four years as Vice President (Corporate

Strategy & Planning). She was part of the top management team responsible for the company’s U.S. business as well as its worldwide industrial businesses.

After changing three jobs in a span of 14 years, Nooyi finally settled with PepsiCo in 1994 — when she joined Pepsi as the Senior Vice-President (Corporate Strategy and Development). In the process of joining PepsiCo, she set aside another offer from General Electric, one of the world’s best run companies under Jack Welch, the legendary CEO of GE – keeping faith on the words of the then CEO of PepsiCo Wayne Calloway. Calloway was supposed to tell her that “Jack Welch (GE’s legendary boss) is the best CEO I know, and GE is probably the finest company. But I have a need for someone like you, and I would make PepsiCo a special place for you.” How right he was! And this was strongly vindicated by this woman of substance over the next twelve years.

Indra Nooyi was able to make a mark for herself in this $33 billion global convenient foods and beverages company within a very short time. One of the key executives behind the company’s transformation into a focused food and beverage entity, her most notable achievements at PepsiCo includes the drive to spin off the company’s struggling restaurant division, which included Kentucky Fried Chicken, Pizza Hut, and Taco Bell in 1997; the spin-off and public offering of company-owned bottling operations into anchor bottler Pepsi Bottling Group (PBG); influencing the company’s $3.3 billion acquisition of Tropicana, the juice company, in 1998; and arguably the most discussed – the US$ 13 billion move to acquire Quaker Oats, that brought the vital Quaker and Gatorade businesses to PepsiCo.

As a result of her performance at the helm of affairs in PepsiCo, Nooyi was made the President and Chief Financial Officer and was also appointed as a member of board of directors of the company in 2001. In this position, she was responsible for all of PepsiCo’s corporate functions, including finance, strategy, business process optimization, corporate platforms and innovation, procurement, investor relations and information technology. Nooyi has helped engineer over $30 billion worth of deals in the past few years and has successfully combated some fierce competition from its arch-rivals Coca Cola. Recently, she has been driving critical cross-business initiatives to enhance operations and enable PepsiCo to meet the changing needs of consumers and retailers. Nooyi has directed the company’s global strategy for over a decade and remains a primary architect of PepsiCo’s restructuring moves.

Nooyi is also a Successor Fellow at Yale Corporation and serves on the board of directors of several organizations, including Motorola, the Federal Reserve Bank of New York, the International Rescue Committee, and the Lincoln Center for the Performing Arts.

The complexities and intricacies of a high profile job like that of the CFO of PepsiCo have not been able to wither the nuances of a typical South Indian woman from the life of Indra Nooyi. Deep into the heart, she is still very much an Indian wife, an Indian mother and an Indian homemaker – no matter how much up the American Corporate ladder she is placed. Nooyi has mastered the vital art of balancing her family life with the corporate life and is equally adept in meeting the various needs and demands of her two daughters at home as she handles the different issues raised by her peers, subordinates, customers and shareholders in her office chamber.

Nooyi lives at Greenwich in Connecticut with her husband Mr. Raj K. Nooyi – a Management Consultant and their two daughters. She is a highly religious person and a believer in Lord Ganesha and Lord Balaji of Tirupati. In fact, not only that she keeps an image of Ganesha in her office, she has also influenced some of her colleagues at PepsiCo to keep one at their respective offices on being told about the Hindu belief about Ganesh being the symbols of auspicious beginnings.

According to Nooyi, her central pillar of success rests on three important factors, which are “family, friends and faith”. She maintains that prosperity and comforts notwithstanding, “when things look bleak and uncertain, it’s your family, friends and faith that pull you through….And when I’m wrestling with change in my life, good or bad, the first place I turn to, is my religion. I tell you, it really helps”!

The foundation for Nooyi’s accomplishment can be attributed to her humble middle class background where she was always compelled to study hard and work hard to make a name for herself. She believes, follows, practices and professes a set of guidelines or ‘rules to succeed’ – which she finds to be the key to excel in life. Phrases like “Be yourself – never hide what makes you “; “know what you want to do in life”; “Aim high and put your heart into it,”; “Never stop learning and keep your natural curiosity alive” and “keep an open mind and follow what goes on” – may sound simple words, but when followed to the core, might lead to what Indra Nooyi is today!

Indeed, all these years of hard work and toil must have been well awarded for this Indian lady who has just completed her golden jubilee – when on the 14th of Aug, the Board of Directors at PepsiCo named Nooyi as the next Chief Executive Officer, effective October 1, succeeding Steve Reinemund, who plans to retire next May. The Pepsico Board said in a statement: “We are exceedingly fortunate to have a leader of Indra’s calibre, vision and experience to take the helm. She has been instrumental to PepsiCo’s solid direction and ongoing success and has the complete endorsement and support of the board.””

Nooyi will be the fifth CEO in PepsiCo’s 41 year’s history, following the footsteps of Steve Reinemund, Roger Enrico, Wayne Calloway and founder Don Kendall. Incidentally, she will belong to a small band of female CEOs heading up Fortune 500 companies that include Meg Whitman of eBay, Patricia Woertz with grains giant Archer Daniels Midland, and Anne Mulcahy at Xerox.

The success and achievement of Indra Nooyi is just not her own success. It is the success of every single Indian – boy or girl who dreams big and believes in themselves. It shows that if talent is genuinely supplemented by hard work and determination, even an Indian girl of humble background with no big money and solid backing can make it to the top of one of the world’s biggest company within a span of only 26 years. Indra Nooyi is an example to follow, an icon to revere.

Nooyi undoubtedly stands apart and stands tall as one of the most successful corporate icon and businesswoman of the world by virtue of her grit, determination, perseverance, hard work, business acumen, traditional background, simplicity and a genuine self – the very virtues that build her identity as an outstanding performer, a global corporate celebrity and a deserving NRI achiever!