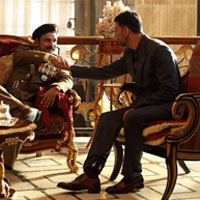 Inaamulhaq, who was last seen with Akshay Kumar as Iraqi Major Khalaf Bin Zayd in Airlift is all set to surprise the audience in altogether a new role. He will again be seen in a significant role with the Khiladi of Bollywood, Akshay Kumar as a part of an ensemble cast which is directed by Subhash Kapoor.

Inaamulhaq says, “It is an honour to work again with superstar Akshay Kumar. We’ve shared good memories while on the sets of Airlift, and I am sure we will build more with the great success of this film too.” Adding further he says, “It is my great pleasure that I got an opportunity to work under the direction of Subhash Kapoor. I have always admired his work from “Phas Gaye Re Obama” to “Jolly LLB” to “Guddu Rangeela”. I got a call from his office while I was in my hometown for Eid Celebrations. Subhash Sir narrated the script to me on a video call. The wonderful script made me immediately say ‘Qubool hai’, Qubool hai” he laughs.

Asking about his other projects Inaamulhaq says, “There are few more interesting projects in pipeline and it is too early to talk about them now. I am proud for the kind of cinema I have done till date and hope to maintain the consistency in future also”.

Historical Thriller ‘31st October’ Finally Gets Green Light From Censor Board
Prateik Babbar: Deepika would be ideal to play Smita Patil in her biopic