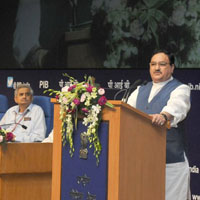 India achieves yet another public health milestone; becomes first country to be declared free of Yaws, an infection of the skin and bones, much ahead of WHO global target year of 2020.

India has acknowledged as the first country in the world to become YAWS-free.

Union Health Minister JP Nadda received an official citation from the World Health Organisation and the UNICEF for Elimination of Maternal and Neonatal Tetanus and for being YAWS-free on Thursday.

An official statement said, “India was validated for MNTE in April 2015, much ahead of the global target date of December 2015.” According to the WHO, 19 countries have still not reached the MNTE status.

The Union Health minister said that Following the success of polio eradication programme, these achievements reflect the dedication of the country towards achievement of health equity and universal health coverage.

He added that this accomplishment is significant as India has achieved the milestone of being YAWS-free much before the WHO global target year of 2020.