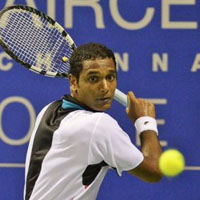 India have gone one up in the davis cup tie against South Korea in the Asia Ocenia group I tie at Chandigarh.

The 21-year-old Ramkumar Ramanathan making his debut for India in mens singles won the opening tie 6-3, 2-6, 6-3, 6-5 as his opponent Seong-chan Hong of South Korea conceded the tie retired hurt. Ramanathan won the opening set 6-3 against Seong.

The Korean bounced back strongly in the second set to win with a double break at 6-2.

Ramkumar came back to winning ways pocketing the 3rd set with a break of serve to win 6-3. The two players held serves till the 11th game before Seong-chan Hong got hurt and handed the opening tie to India.