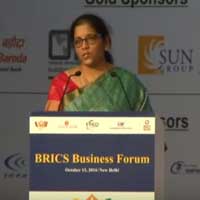 Ahead of the BRICS Summit, trade ministers met in New Delhi on Thursday and talked about a number of issues including how to boost employment and correct trade imbalances.

Ahead of the BRICS summit this weekend trade ministers from all the BRICS countries met in Delhi.

The meeting was hosted by Commerce and Industry Minister Nirmala Sitharaman and was attended by her counterparts from Brazil, China, Russia and South Africa.

A number of bilateral meetings were also held during the day with Chinese, Russians and Brazilians.

During the bilateral with Chinese counterpart India raised the issue of mounting bilateral trade deficit and called for greater market access for its Indian goods in Chinese markets.

Over 600 exhibitors are showcasing their products and expertise at the BRICS Trade Fair, spread over 30,000 sq. m. of exhibition space. The expected footfall at the 3-day Fair is 10,000 plus visitors.